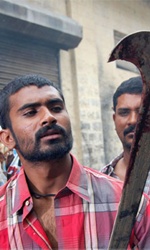 Young director Santhu makes his debut with "Alemari". There were a lot of expectations from the film, but it ends up as a mixed bag, making an impact only with its technical values. The narrative, in some parts, turns out to be painful to watch.

"Alemari" is a well-performed product, but still fails to reach out to the audience because of its lengthy narration.

The story begins with Mohan (Yogi), who sells milk in his neighbourhood, and falls for a poor, young Brahmin girl Neeli (Radhika). Neeli gets attracted to Mohan too, but her father opposes the alliance. Her father arranges her marriage with another boy, but upon realising Mohan`s true love for his daughter, he agrees to their relationship.

Meanwhile, Mohan is up in arms against a rowdy gang headed by Nimhans Soori. Soori wants to become a don and he is helped by Mohan`s brother-in-law Palav Rajanna, who has a criminal background. Rajanna advises Soori to kill a certain money lender Naganna to become notorious in the underworld.

Mohan, who had a soft corner for Naganna, gets angry and fights against Soori`s gang. He gets brutally attacked by the Soori gang on the crucial day he had to meet Neeli.

Afer the murderous attack on Mohan, Soori`s gang members think he is dead and leave him. But Mohan resurfaces with another get up afer a few years when even his mother and others refuse to identify him. However, an already married Neeli recognises him, and he gets into a fix about what to do.

The film`s hero Yogi delivers his best performance by featuring in two different looks. He is developing as a very good actor with each film and "Alemari" clearly proves his mettle.

The same applies to young Raakesh, who plays the antagonist`s role perfectly.

Radhika Pandit is as brilliant as ever with her plain Jane looks and high voltage performance in emotional sequences. She looks stunning in the songs, while veteran artists Umashri, Ramesh Bhat, Mico Nagaraj, Ramesh Pandit, and Raghuram have done their work perfectly in the film.

For the betterment of the film, Santhu should have avoided the inclusion of many sequences, which were perhaps added only to enhance the project`s commercial value. However, he has scored a six in the music department with wonderful lyrics for the songs.

The film`s technicians have done praise-worthy work. It looks stronger in fight sequences and song picturisations too.

Deft editing in the first half, and removal of some unnecessary sequences in the second half, could make the film a little more compact and attractive.

Among the songs, it is the melodious "Alemari" song, the raunchy "Thundu beedi" number and the "Neeli neeli" track, which are brilliantly composed.

Despite its lengthy narration, "Alemari" is watchable mainly because of strong performance of Yogi and brilliant technical values.