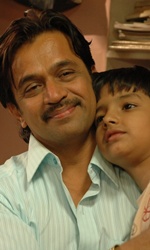 "Prasad" is a touching, yet engrossing tale of a physically challenged boy overcoming all odds to prove his talent in swimming.

Backed by good performances from Arjun Sarja and Master Sankalp, who is a deaf and dumb person in real life also, director Manoj Sati weaves a socially relevant film that gives lot of hope to many parents of physically challenged kids.

The film carries a good message and also calls for a good support from the people to create an atmosphere of goodwill for the helpless children, in the process of improvement.

Watching "Prasad" will make viewers understand the importance of standing by the physically challenged children and allowing them to grow and get an identity of their own.

Here Manjo Sati has not gone overboard on the emotional side, but he has just narrated the film as the sequences unfold. The film does not lose its grip at any time.

Music director, maestro Ilayaraja has also elevated the film`s impact by giving a perfect background score for the film. Even the melodious songs of the film have added a lot of flavour for the film. Shiamak Dawar`s choreography also fits into the film`s mood.

The story unfolds with Shankar, a mechanic who is extremely religious too. His wife Malathi is a perfect foil to Shankar and their one worry is that they don`t have any child. But finally when they are blessed with one, they realise the kid turns out to be a deaf and dumb.

A dejected Shankar hits the bottle and loses interest in educating the hapless child. However, the mother accepts the reality and tries to bring up her child with lot of care and affection.

Later when Shankar realises his folly, he gets his son admitted to a school. Their son grows up to be an accomplished swimmer. In a function held later to felicitate the entire family, Shankar says that parents should not lose hope on their children with physical disabilities, but try to find ways to infuse hope in them.

The only negative part of the film is its climax. It is too cinematic, and could have been avoided. The lottery winning element and the felicitation sequence is a clear lift from many films released earlier.

Arjun Sarja, who is known as an action king, has delivered a fantastic performance in the role of Shankar. He had shown lot of variety in his performance in a film like "Mangathha", but in "Prasad", he is several notches ahead.

Master Sankalp charms you with his performance, but even makes you shed tears in some emotional sequences. Madhuri Bhattacharya also fills the bill, but a better replacement would have elevated the quality of the film to an extent.

The veteran artists in the film like Ramesh Bhat, Neenasam Aswath and Ramakrishna have performed very well.

Music is the real soul of the film. Ilayaraja is at his best in background score as well as in songs composition. Sanjay Malkan`s cinematography is good.

"Prasad" is refreshingly original in most of its narration where each character in the film is well defined. The story does have some twists, but on the whole, it is a well executed film.

The film is sure to haunt you even after you come out of the theatres.