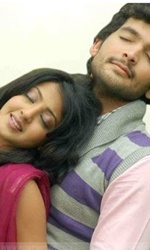 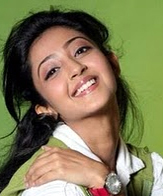 "Parijatha" starring Diganth and Aindrita, who share a great bond in real life too, is a perfect gift for the Valentine`s Day. The lead pair has shown how good chemistry works magic on screen. Though the film is a remake of 2009 Tamil hit "Boss Engira Bhaskaran", the Kannada version is little more attractive, thanks to aesthetically shot melodious songs and perfect comedy timing of Diganth and Sharan.

The film`s director Prabhu Sreenivas, an established choreographer down south, has tried to present leading stars as a lovely romantic pair on screen. The styling work and selection of background visuals and locations have been done with utmost care.

The comedy sequences, borrowed from some other Tamil films, strengthen the fun moment in the movie. The cast is so perfect that even an artist doing a small role impresses.

Another highlight of the film is Diganth, who has been doing urbane roles so far, has transformed himself to play a local boy. His earthy looks, dialogue delivery, accent and the entire body language add credibility to the character.

Even Aindrita works hard to give perfect expressions.

The first half runs smoothly, but latter part drags but soon the film is on track and creates curiosity.

The director has been able to provide full quota of entertainment to the audience despite the script going haywire in a couple of scenes.

Bhaskar, often called Boss, is a good for nothing fellow who whiles away his time with his friend Sundar, a barber. Meanwhile, he gets attracted to Chandrika, a double graduate working as a lecturer. He wants to marry her.

Meanwhile, his elder brother, a veterinary doctor, gets married to the elder sister of Chandrika who advises Boss to become serious in life and amend his ways.

Finally, Boss starts a tutorial and it does so well that he is able to finance his younger sister`s marriage. But still Chandrika`s father refuses to accept Bhaskar as his future son-in-law. But the entire confusion gets cleared in the climax.

Diganth scores brownie points with his innocent looks, dialogue delivery and neat performance. He shows variety in his performance.

Aindrita looks stunning in all the songs.

Sharan compliments with his exceptional performance and good comic timing.

All the veteran artists have performed their roles with ease.

Mano Murthy`s music and background score gel with the mood of the film. The title song and "Nee Mohisu" are good compositions.

"Parijatha" is an enjoyable comedy film, thanks to chemistry of the lead pair Diggy and Andy.