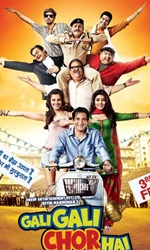 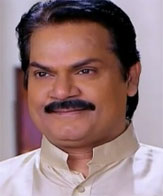 While credit must be given to writer-director Rumy Jaffery for focusing on the issue of corruption, noble intentions don`t necessarily make a notable work of art. Certainly Gali Gali Chor Hai (GGCH) must have sounded amusing and topical on paper. It is a savagely stinging satire on the harassment of the average law-abiding middleclass man, played with arresting earnestness by Akshaye Khanna, in the hands of various touts, middlemen, law enforcers, goons and politicians all of whom infest the tranquil city of Bhopal with the destructive determination of termites eating into a `system` that has long ceased to be if any consequence, moral or ethical.

While the script has some sparkling vignettes and scenes taken from the portrait of a common man trapped in the wheels of a fluctuating fortune, the treatment of the theme of corruption is staid, prosaic uninspiring and frequently bland. The screenplay unfolds in segments and episodes that could belong to a long-running government-sponsored serial on Doordarshan, made with the express purpose of cleaning the bureaucracy`s image.

Lamentably, for all his sincerity, Akshay Khanna`s Bharat remains clueless about what the script hopes to achieve by showing the character running in and out of police stations and court premises, except to project the helplessness of the common man into a script that seeks to desperately extract creative juices out of the bourgeois desperation which has baffled, bewildered, frustrated and destroyed the under-privileged classes the world over.

Sadly the satire doesn`t evoke any empathy for the common hero of this film who is sucked into the vicious vortex of bribery and palm-greasing for no seeming reason except his political innocence. Like Shyam Benegal`s last satirical outing Well Done, Abba this film forgets to oil its joints which creak in protest each time the hero shrieks in protest.

The problem with Jaffrey`s film is its dry almost clinical treatment of the theme of corruption and the Common Man. While the ambience, characters and the plight of our hero Bharat seem authentic, the languid movement of the story suggests a far less involving sequence of events than what we set out to witness when we sat down for a film.

Don`t rub your hands in anticipation when you sit down to watch this ode to corruption. In Singham the slap sounded far more musical to the ears. Yes, there are stray amusing moments in GGCH. But by the time Bharat`s slap on the face of the `system` occurs it`s a case of too little, too late.

And what on earth is that item song with Veena Malik lighting up her vital statistics with Christmas bulbs. A symbol of the common man`s dream gone bust?

Bharat is the quintessential Indian common man, or aam aadmi, who lives in Bhopal, in Central India. He is a cashier at a bank, and, like all bankers, has a trusted sidekick – his scooter. He is also a part-time actor, and portrays the role of Hanuman, the monkey God, at the local Ramleela skit.

His family consists of his wife, Nisha, a schoolteacher, and his father, Shivnarayan, a patriotic, idealistic man, who dreams of a corrupt-free nation.

Then there is Amita, the unwanted guest, who is an employee with a call centre. She is a pretty young thing, which is enough reason for Nisha to be slightly insecure about her marriage. Nisha is ambitious for her husband, and would like him to be promoted from cashier to manager at the bank.

Bharat, however, has other goals. He wants to be Ram, the protagonist in Ramleela. Sattu Tripathi, an extremely bad actor, gets to portray Ram, without opposition, because he is the younger brother of the politician, MLA Manku Tripathi.
Both the Tripathi brothers dislike Bharat, for different reasons. Sattu is overshadowed by Bharat’s superior acting skills on stage, leading to a rivalry between the two. Manku, on the other hand, is miffed with Bharat, because the extra room in the latter’s house is now used as a re-election campaign room by Mohanlal, Manku’s adversary.

And then one day, Bharat’s table-fan gets stolen. The police constable, Parshuram Khushwaah tells Bharat that the local paanwalla, Bacchu Gulkand, can testify in court that it was none other than Chunnu Farishta, burglar par excellence, who is responsible for the crime.

A rather reluctant Bharat then gets sucked into a system that worships corruption and dishonesty, and is forced to bribe his way through criminals and law keepers alike, just to get this table-fan back. What the system does not seem to realise, however, is that even somebody as common as Bharat can snap, and when he does, he can make life hell for a lot of people. 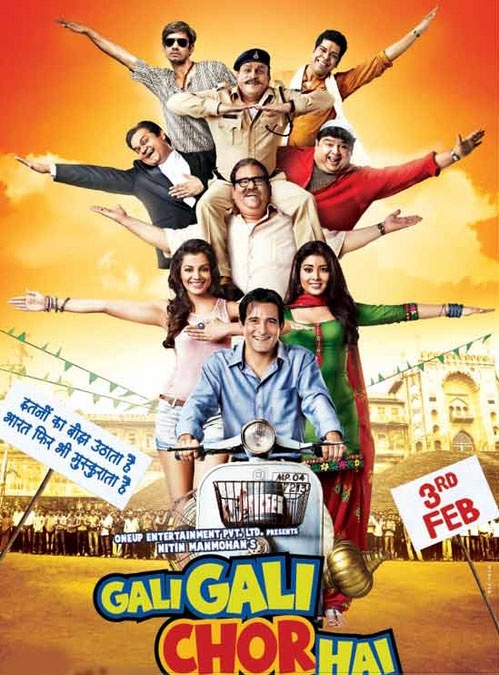