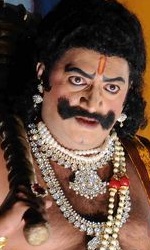 Journalist Sadhashiva Shenoy has shows a lot of promise with his first directorial venture "Prarthane", which shows how Kannada medium schools are neglected in the state. The film is appropriately timed as there is a move by the state government to close down such schools where the attendance is below 10 students per class.

Shenoy throws light on this aspect as well as United Nations report which has warned that many local languages, including Kannada, are on the verge of extinction because of the absolute loss of focus in developing the languages.

Shenoy narrates the film in an interesting fashion and engages the viewers. He is also successful in sending out his message through brisk narrative and penetrative dialogues.

J.M. Prahlad, who has written the story and dialogues of the film, has to be complimented for writing such a contemporary story.

The starting sequence and the end scene leading to the climax will really touch viewers` heartstrings. It will also make viewers introspect about the present situation where regional languages are facing a big threat from the spread of English language.

Shenoy teamed up with some of the best artists in the Kannada film industry like Anant Nag, Prakash Raj, Pavithra Lokesh and many others and it made his work much easier. His screenplay is the real hero as he does not allow the narration to deviate from the prime focus.

Shenoy should be complimented for not making the film too melodramatic. He narrates the sequences as an honest reporter without taking sides and not allowing sequences to have sentimental overtones.

The film suffers from technical hitches, perhaps because of budget constraint, but still it is better placed.

Anant Nag as a Kannada teacher who puts his heart and soul to make his institution a a model school proves once again that he is a top line actor in the country. His dialogue delivery, controlled performance is sure to win the heart of viewers.

Without a doubt Prakash Raj is brilliant too.

If Pavithra Lokesh, Dinesh Mangalore, Ashok, B.C. Patil shine in their respective roles, child artists too have excelled in their roles. Veera Samarth gives a good background score for the film and the song "Jayabharathi" is soothing to ears.

"Prarthane" is a really good attempt and deserves to be encouraged.