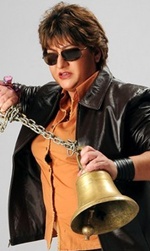 Malashri, known as Lady Amithabh in the Kannada film industry, is the saving grace of "Shakti", produced by her husband and top line producer Ramu. The film is poorly narrated and subject lacks freshness. Also, the film does not move at a sustained pace and many sequences will remind viewers of Malashri`s previous action movies.

The so-called punches in the dialogues have been heard many times before. Malashri`s dubbing lacks the clarity element, though it is appreciable that the actress has tried to dub in her own voice.

Malashri has always proved to be one up in action sequences. Though the actress has returned to films after a long gap, she tries her best to do well in fight sceenes and mouthing punchy dialogues.

The actress has shouldered the burden of the film to an extent, unfortunately weak script is no help for her in any way. It seem such a talented artist, who excelled in films like "Nanjundi Kalyana", "Muththinantha Hendathi" and "Belli Kaalungura", has been wasted in such an average action flick made with bad content. Loudness and too many action sequences will certainly bore the audience.

As already stated that action and chasing sequences may attract the front-benchers, but other than that the film has too little to excite fans.

Many elements in the film`s story reminds you of recent blockbuster "Sarathi", but the film does not have the necessary entertainment quotient like that of the Darshan starrer.

The plotline has too many holes; songs have been badly shot and the much publicised Shivaraj Kumar falls flat because of lack of imagination.

In the film, Shakti works as a labour and suffers from loss of memory due to a past incident.

A rich man, Anjanappa, engages labourer to guard his daughter who is in love with her friend. Shakti helps Anjanappa`s daughter to elope with her boyfriend. Anjanappa`s henchman attack Shakti who becomes unconscious after fights. She is admitted to a hospital where a police officer identifies her as Chamundi, a strict police officer whose heroic deeds had sent shivers down anti social elements`s spine.

During her tenure Chamundi had fought with minister Bettadappa, who was responsible for the death of 30 children. She is later posted to Rayadurga where a family of mafias rule the town and use muscle power and threats to keep people under their control.

How Shakti alias Chamundi regains consciousness and take on the villains forms the rest of the plot.

Despite some poor dubbing work, Malashri has been able to show energy in action sequences. Ravishankar is a very fine actor and he proved his capabilities in films like "Kempe Gowda", but in this movie he only shouts and screams as a result looks atrocious on screen.

Sharath Lohithashwa also shouts and Hema Choudhary gives company to these artists by raising her voice to peak in all the sequence she features into. Sayaji Shinde`s dubbing is irritating.

The comedy portions featuring Sayaji, Sadhu Kokila and Kurugalu Pratap are another let down. Many other artists are wasted.

Rajesh`s camera work is much better compared to Vardhan`s music. Background music is well executed and editor has done a neat job. An experienced director would have been able to make "Shakti" work at least in B and C Centres.

"Shakti" has absolutely nothing to offer to movie lovers.