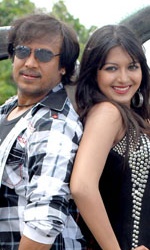 It is another Kannada film that bears the name of Kannada movie icon Vishnuvardhana. This film is titled "Vishnu" and directed by actor Abhijit who has played two roles in it and who was very close to the late legendary actor.

But unlike "Only Vishnuvardhana" which was released a week earlier, this film does not use the name of the iconic actor extensively and show the clips of his many films. But a photograph of Abhijit and Vishnuvardhan is displayed with a note that the film has been dedicated to the late actor.

The film has a revenge-based story which is full of commercial elements like action and thrills. A little bit of comedy is also thrown in with actor Bullet Prakash trying to pull a few comedy punches here and there.

But the story is too predictable to sustain any interest among the audience. Even the technical value of the film is below the average standards that are exhibited in many contemporary Kannada films.

The camera work is pathetic but the graphics work is slightly better. Krupakar has done just average work in his music compositions.

The first half is badly narrated while the second half is little interesting. But overall, the film suffers from low quality of production and a haphazard narration.

Vishnu is a do-gooder who comes to his native village to help one of his friends who is trying to marry his lover -- the daughter of a village ruffian who torments the villagers.

When Vishnu finds that most of the villagers treat him specially and give a lot of respect, he goes deep into the reasons for such reverence.

He understands it is all because of his father Narasimha who tried to protect the villagers and do good things for the benefit of the village. His attempts to help out the villagers for constructing a lake are not to the liking of his relatives who kill him.

Vishnu avenges the death of his father by killing his relatives responsible for the murder.

Abhijit`s attempt to have a new look in both the roles has not yielded good results. His hair styling is atrocious. However, he has excelled in action sequences. The film`s heroine Catherine is only there for her glamour quotient and nothing else.

The veteran actors, including Ashish Vidyarthi and Sharath Lohitashwa who play the villain`s roles, just shout and scream rather than showing their talents.