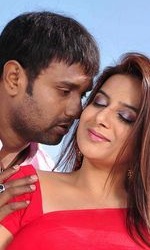 Director P.N.Sathya who was acting in character roles in some films turned a hero through his own film `Paagal` which is produced by his friend and actor Muralidhar. Many directors have turned heroes earlier, but somehow their attempts have not been successful.

Director S. Narayan did achieve a certain degree of success in a few films, but later on he could not sustain himself as an actor because he focused more on direction.

Sathya who has directed many successful films with actors like Darshan and Sudeep has given a serious try to become a lead actor through `Paagal`, but unfortunately he has not been able to make any impression.

Somehow his badly written script also contributes to his failure as an actor and his limited expressions proves to be a big letdown.

Despite getting a big support from cameraman Niranjan Babu and a pleasing music by V.Manohar, the film does not go above in terms of performance and presentation.

The film lacks novelty, Sathya should have seriously thought whether he could do justice to the role he had himself created.

The choice of Pooja Gandhi for the lead role is good, but her characterisation looks unconvincing from the beginning. Sathya has liberally used many under the belt dialogues which may not go well with the audience.

Sathya`s films were not known for their novelty and freshness, but this time he has been strongly influenced by director Upendra`s film `A`, which is apparent in the beginning of the film.

Even the hero`s role has been much influenced by Upendra`s characterisation in the film `A`.

One redeeming feature is that Sathya has used a small blade for committing voilence in the film, he has used sickle and sword in most of his films earlier. Other than that there is not even one sequence that can be remembered for its impact in the film.

Sathya plays the role of an orphan child known as Thotti (dustbin) abandoned in a street dust bin. He grows up in a slum to become a rowdy and meets a girl Pooja, who aspires to become a singer.

After confronting the protagonist in many sequences, Pooja names him as Surya, who uses his contacts to make her a singer. Pooja becomes a heroine later with the help of a producer who misuses her. A disgusted Sathya loses his mental equilibrium and becomes extremely violent thereafter. There is an unexpected climax.

Sathya has failed as an actor and writer with `Paagal`. He has limited expressions which may look good only in negative roles. His dialogue delivery remains the same.

Veteran actress Thulasi Shivamani and producer Muralidhar who plays a negative character in the film are impressive.

Director Indrajith Lankesh who does a cameo in the film makes an impact. Actors Bullet Prakash and Harish Rai are used sparingly.

Veteran director K.S.L.Swame who has sung the original song number "Ille Swarga" has also rendered play back for the remixed song. Another original song in the film is "Ee Bhoomi Hakkiyaagi Haadidhe".

`Paagal` is an ordinary venture which can be watched once.