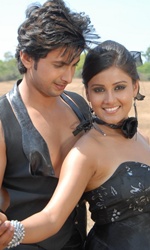 "Achchu Mechchu" has an unconventional theme, which could have been turned into a great cinematic piece with a message. The story deals with a young son`s desire to get his mother married to a professor as per his late father`s wish.

In the past, quite a few Southern films with novel themes like a daughter trying to get her mother married to her ex-lover were made. In 1984, well-known Telugu director Kranthi Kumar made one such bold attempt with "Swathi", which won the Best Film Nandi award from Andhra Pradesh government. Later, it was remade in Tamil and Kannada.

But the Kannada film "Achchu Mechchu" does not evokes any such interest. Leave aside being a classic like "Swathi", the film is not even an average product.

Director Himayat Khan has failed to turn a good story into a decent movie. The redeeming features are - Tarun`s performance, Neel`s composition and cinematography. Dialogues and screenplay are pedestrian in style.

Khan also made a wrong choice while picking Archana Gupta as the lead actress. Less said about the comedy elements in the film the better.

Narration is too boring and the second half, which could have been made interesting, fails to pick up the required tempo.

Khan should have worked well on the script before he started shooting. Many serious sequences look too farcical. Even the villain is made to look like a buffoon.

This is the story of Vijay and his three friends are infamous for their irritating actions in their college.

Vijay is in love with Shradhdha and their relationship doesn`t go down well with a professor. The four member gang take the professor for granted.

Meanwhile Vijay receives a letter by his late father, who wrote it on the death bed and expresses his desire that after his death his wife should marry her ex-lover.

To Vijay`s dismay, her mother`s ex-lover is none other than the professor he has been bothering with his pranks. Vijay gets serious and tries to bring his mother and the professor together.

Tarun not only looks handsome, but makes a good impression with his acting. Archana fails to make any impact.

Veena Sundar, who plays the mother, impresses with her decent performance.

A talented actor like Achyutha Rao has not been presented properly as his characterisation is weak. He could have been used more effectively.

Music composer Neel and cameraman Nagesh Acharya have done a fairly good job. Nothing positive to write about the technical department.