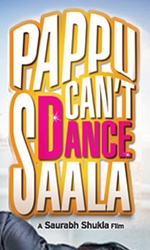 Made on a shoe-string budget, this film is a roller-coaster ride about the life of two individuals who have come to Mumbai, the city of dreams and luxury. The title, Pappu Can`t Dance Saala is misleading.

The `Pappu` is not the proverbial idiot. Nor is the movie about his dancing capabilities. Instead, Pappu Can`t Dance Saala is a simple film that captures the essence of Mumbai and the struggle of outsiders who come here to make it big in the city.

A rom-com, the film is about an odd twosome who experience several odd situations that eventually get evened out and they discover they have fallen in love with each other. So sweetly predictable!

In a government residential complex in Mumbai, Vidyadhar Acharya (Vinay Pathak), a simpleton from Benaras with humanitarian and middle class values is working as a medical rep. His neighbour Mehak (Neha Dhupia) is an overtly ambitious, brazen streetsmart dancer.

He is a conscientious and morally bound citizen. She is fun-loving, bohemian and an opportunist. They can`t see eye-to-eye simply because of their conflicting lifestyles.

Vidyadhar, forever cribbing, has a problem with any and everything in Mumbai, whereas Mehak is the proverbial Mumbaikar with a `chalta hai` attitude. She forcefully shifts into his pad when thrown out of her rented apartment. The film is filled with simple sweet messages to be taken in the right spirit.

Neha Dhupia`s portrayal of Mehak is convincing and the highlight of the film. Her taut body and reflexive steps to match is a frontbencher`s delight. Vinay Shukla is typecast and offers nothing extraordinary. She flaunts, he hums.

Rajat Kapoor as the choreographer-cum-music video director with mysterious charm and subtlety keeps the audiences hooked.

Naseerudin Shah in a two-scene role as Vidyadhar`s father mesmerises. He literally steals the thunder from the hero in the river bank scene where he reveals to his son in a powerful dialogue: It is destined that the banks of the river can never meet but when man decides they should meet, he builds a bridge, only to make his son realise that if man has the will, he can find the way.

The first half of the film is snappy and moves with ease. The second half, slow yet lively with a predictable goal, gets a bit boring.

Given the production values, Longinus Fernandes` choreography is worth a mention.

The dialogues are good, witty and above average. The storyline, simple and straight from the heart, is a bit of a setback coming from the brilliant writer director Saurabh Shukla. His third project as a director and his graph seems to stagnate.

Overall, the film is of mediocre production value with several cinematic liberties and is made with a sincere effort. It is worth a watch if you are looking to learn life`s lessons, simply.

It is a romantic comedy of two people who are from two different worlds.

Vidyadhar Acharya (Vinay Pathak) has just shifted from Banaras to Mumbai. A man with old world values who finds it difficult to adjust in the city of professional attitude. He finds Mumbai heartless. He misses home ...

Vidya is a medical representative in a private firm, with a bare survival salary. He manages to find a flat in sales tax colony, where legally no tenant can be kept. .. And that is the reason that the rents are low. The house is quiet comfortable but the only problem is the unexpected raid of the vigilance department. At such occasions, Vidya has to run and hide till the vigilance officers leave the compound.

Mehak Malavde (Neha Dhupia) is a chorus dancer in Bollywood. She has learned the tricks of surviving in this fast paced city. She is loud and jazzy. Her friends also are quiet noisy.

Palash is the ace choreographer and Mehak works in his group. Palash is obsessed with his art and appears emotionless, at times rude, as a person. Mehak looks up to him. She is infatuated with him.

Mehak shifts in the flat opposite to Vidya`s. Vidya instantly dislikes her. She also hates him. Vidya finds it quiet difficult to deal with her flamboyant neighbour and her loud friends, whom Vidya considers as uncultured. It starts a series of confrontations between them, where Vidya has to retreat most of the time.

One day Vidya returns to find, that in his absence, the Vigilance department had conducted a raid on his building. Vidya was lucky that he was not at home. But Mehak had no such luck. She was caught by the Vigilance officers and was evacuated from her flat. They have sealed the flat.

Vidya is very happy as the core cause of his problems has been removed from his building.

He reaches home only to get a shock of his life....

The lock of his flat is broken ... and Mehak has occupied his house. She blames Vidya for being a responsible for the raid. Vidya finds it ridiculous and asks her to leave immediately. She refuses and announces that she will use his flat till she gets her own back. A frustrated Vidaya threatens to call police. Mehak reminds him that in such a scenario, even he is going to loose his house.

Now begins a journey of two people, who can`t stand each other, stuck in the same flat.

Meanwhile Mehak gets a break as the lead dancer in a prestigious Music video.

She is very happy and makeovers the flat. Vidya is shocked see his well done up but unrecoganisable flat. Mehak requests him not to fight on that happy day of her`s. Vidya understands and congratulates.

But then there is a raid...

They both run to the terrace to hide ... In that long wait for the raid to get over, they spend a moment of sharing. That starts a new relationship of understanding between the two. Life is good now. Vidya has started liking Mumbai. Mehak also likes this new life, where there is a friend, who cares. Vidya is enchanted with the freedom of Mehak`s soul where as Mehak finds caring and concern in Viday`s grounded life.

In a vulnerable moment, she tells Vidya that she has left her home and has been a disgrace to her parents. She wants to achieve success, so that her parents can be proud of her. Though she wishes that they were with her in this glorious moment of hers, when she starts shooting for the Music Video.

On the shooting day Mehak is shocked to see her father entering with Vidya. Vidya thinks that this is going to reunite the family. But father gets very upsets as he feels that his daughter has brought disgrace to the family, by dancing publicly, in skimpy cloths.

That night Vidya and Mehak have a fight. The contradiction in their ideologies parts them.

Mehak moves out of the house and a dejected Vidya returns to Banaras.

But both are unhappy and lonely.

Time spent apart makes them realize that life is not in extremes. So they come on a common ground, to live happily ever after.