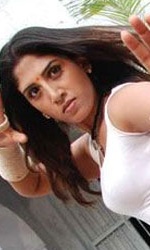 Ayesha, a trained Karate and Kungfu expert known as Karate Queen in the film industry, makes a comeback with "Obavva" and shows her prowess in fight scenes. Ayesha plays Lady Amithabh with five rocking fights in the second half.

The story is nothing but a remix of Shankar Nag`s 1980s Kannada films "Seetha Ramu" and "Chandi Chamundi". Director Anand P. Raju has never been apologetic about the fact and acknowledged taking references from the two films.

Despite many flaws in the film, Raju has been able to present an engaging and entertaining movie. One thing that can be said in favour of the film is the fight sequences featuring Ayesha and film`s hero Deepak.

Till the end of the first half, Deepak makes his presence felt with punchy dialogues and fights. But Ayesha takes over with five fight scenes in the second half, which may not appeal to family audiences. Since there is a niche audience for actioners, so the film may have a limited appeal.

other problem is that the producers have chosen a title with a historical significance. It is known Obavva, who was called Onake Obavva, saved the kingdom of Chitradurga rulers when Hyder Ali`s army wanted to surreptitiously enter the town through a hole in the fort. Obavva killed them single-handedly and the army waiting outside the fort had no option but to retreat.

The title is unsuitable but the director has tried to justify it by naming the heroine`s character as Obavva.

The music and camera work does not raise above ordinary levels.

"Obavva" revolves around Badri, an auto driver employed by Obavva`s father. Obavva secretly loves Badri, but he always stays away from her. But Obavva gets her parents` permission to marry Badri.

Meanwhile, local don Devaraj wants to usurp Ayesha`s father`s property. His henchman - Deal Dharma and Skill Jain - use violent methods to get hold of the property, but Badri intervenes and beat them to pulp.

But he is killed by Dharma, who stabs him from the back. Later Badri`s spirits enter Ayesha`s body and she reliquishes the villains.

Deepak scores in action sequences and his dialogue delivery is lovely. Though short in performance, Ayesha comes out good in Kungfu action sequences. Swasthick Shankar, Shobharaj and Petrol Prasanna play baddies with ease.

Nothing could be said about music or camera work, three fight masters have done a better job. Ayesha`s performance is a treat for action film lovers.