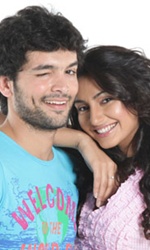 Rating: Half a star

Engineer-turned-director Sai Ganesh`s debut movie "Kaanchaana" was marketed as a comedy aiming to provide relief to the audiences with funny situations, dialogues and songs. Since the film was made by young enthusiasts from corporate world, there was a certain level of expectations from the film, but it is a disappointment and ends up as a perfect example as to how a film should not to be made.

The script of "Kaanchana", which means money, was to deal with greediness and how people stoop to low levels in attempt to make money. But what you see on screen is the lack of a story, disjointed script, silly dialogues and very ordinary performances even from experienced artists.

To add to the disappointment, the narration drags from the first sequence and often test the patience of the viewers.

The main culprit of the wasted effort is the director himself who might have taken things easier. People like Ganesh should realise that filmmaking is a tough job and it is not easier to convince a large segment of the audience despite having well-known artists and technicians.

The flaws of the film are that the story is poor, technical department`s work is below average and young artists - Diganth and Raagini - have not been properly used.

Set in the television world, it shows that Venky, Nani and Sathish work for a television channel and have specialised in making a programme called "Bakra". But the company`s boss is always complaining.

Venky`s is in love with Baby, who is a charmer. Venky and his friends are disillusioned because they feel their hard work is not appreciated and they talk about making money.

But luck has something else in store for Nani and his two friends, who fall into a trap of a trickster who asks them to arrange Rs.2.5 lakh for a big heist. All four visit a bank posing as inspectors who want to transaction records. But they are caught and brutally handled by the cops even though they tell the bankers that they were doing it for their "Bakra" show.

Later they plan to earn money through ransom, but it also goes awry.

Then enters a gang, who promises Venky that they will help him in getting bail for his friends provided he help them in getting an important file. They are offer Rs.1 crore for the job.

This silly saga continues for some more time.

Diganth and Raagini are a good, but script lets them down. Though there is a huge number of comedians in the film, very few scenes are funny.

The film is so bad that even a top cinematographer like Sundaranatha Suvarna has not been able to provide a neat work.