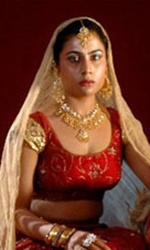 The vinyl designs and posters of "Ishta" looked interested and appealing, even the stills and the promos of the film showed promise. But, alas, it`s an effort gone waste.

The film has been made by the family members of the movie`s heroine Bhumika. Even though she is decent in the film, it`s the director who is the main culprit in spoiling the entire team effort with his weak technical basics.

The producer of the film, Bhumika`s father, has gone an extra mile to present a film with locally rich flavours but the cinematographer`s ordinary work doesn`t do justice to it.

The music has an edge over other technicians, but the main villain of the film is the first time director himself, who with his weak script has presented a tasteless curry to the audience. It is a perfect example to show how bad direction can change dynamics of a film and turn it upside down.

"Ishta" is about young boy Krishna (Santosh) who kills his father, in front of his mother when he was trying to rape a young girl. So Krishna is imprisoned for 14 years and at the same time misunderstanding develops between the son and the mother.

In the meantime, jailor`s daughter Nanda (Bhumika) falls for Krishna, it is one sided-love as Krishna doesn`t respond to her. At the same time, Nanda`s relative, Ravi, wants to marry her. He knows that she likes Krishna and makes a plan to kill him.

Finally the film ends up with many unconvincing twists and turns much to the relief of the helpless audience.

In the film, Santosh tries hard to portray the role. Bhumika looks good with gorgeous costumes but should have worked hard for a neat performance. It is Ravi Teja who excels as a villain. The supporting cast is equally mediocre. Technical work is below average except for the background score which is fairly decent.

"Ishta" could have been a pleasing film but the director`s haphazard work spoils the show.