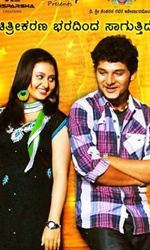 Amoolya made a sensational debut with Cheluvina Chiththaara four years ago. She was just 14 at that time and after that she has worked in one film a year because she can only shoot during her college holidays.

In a short span, Amoolya not only proved her mettle with films like Premism and Naanu Nanna Kanasu, but also matured as an actress therefore the Kannada fans were expecting something different from Manasology. But the film, produced and directed by her brother Deepak Aras, disappoint.

Amoolya`s performance is average and the reason is weak script and boring narrative. Another flaw is that her inexperienced brother mishandles the subject.

Other artists Rakesh and veterans Achyutha and Sadhu Kokila too fail to ignite the screen due to the unpreparedness of the director.

The weakness of the story and the script apart, the director has not been able to extract right performances from the lead artists. The only redeeming feature of the film is the music by Anoop Sileen. Sugnaan`s picturisation of songs are good.

The story starts with a music student, Sihi, getting calls from Manas, who is in love with her. Sihi shares everything with her father Achchu therefore he knows about this unknown friend who has been talking to her on phone.

The day Sihi decides to meet Manas, Achchu gets a call that Manas met with an accident and when he reaches the spot, he finds out that Manas is dead. But he does not tell all this to his daughter.

Meanwhile Manas` look alike keeps meeting Sihi regularly. Achchu is disturbed and tries to tell Sihi the truth, but she refuses to believe him.

Finally, in the climax mystery is unfolded.

Manasology suffers because of immature handling. Avoid it.