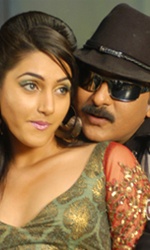 Kalla Malla Sulla can be traced to Tamil film Prabhu and Prabhu Deva starrer Charlie Chaplin, made a decade ago. It also had its Telugu, Hindi and Malayalam versions, which were big hits. Kalla Malla Sulla has taken inpsiration from the Hindi remake No Entry featuring Salman Khan, Anil Kapoor and Bipasha Basu.

Kalla Malla Sulla is a non-stop comedy in the second half, which is why viewers look happy when they come out of the theatre.

Anybody will laugh while watching the fourth version of the original Tamil film, despite the fact that the earlier versions and its repeated telecasts have been seen and enjoyed. And that is precisely the strength of the script.

Another highlight of the film is the perfect casting. Almost all the artists selected for the film look apt for the roles they perform.

The music for which the tunes have been lifted from the Malayalam version is another highlight and the songs are choreographed very well.

The only flaw is dragging moments in the first half and the double meaning dialogues, some of which are, however, muted.

But Kalla Malla Sulla is sure to entertain with its rich production values and good performances. Actress Raagini adds lot of spice with her glamour quotient and Tuppa Thuppa song.

In the film, Ramesh is a newspaper editor and his suspicious wife, Ramya, makes life difficult for him.

Ramesh has a trusted aide, photo journalist Raghu, and they are tracking the sexual escapades of a corrupt minister. But they end up taking a photo of an industrialist friend Ravi kissing a foreign girl instead.

The photograph is shown to Ravi`s wife to caution her, but Ravi wriggles out of the situation and decides to teach a lesson to his friend and the photo journalist.

Then comes a point when Ramesh`s marriage is on the verge of collapse and at that point Ravi introduces him to Kushboo. Ramesh falls for her, which further complicates his married life.

Meanwhile, Raghu and his girlfriend Sanjana`s relationship hits the rough patch and they are on the verge of separation. What happens to all the relationships forms the rest of story, which has fun, frolic and wholesome entertainment.

Ravichandran has retained his original style for the film and the songs featuring him are shot well. Ramesh Arvind is perfect as Ramesh and his experience helps in comical situations.

Vijaya Raghavendra once again proves that he is the most talented actor among the young heroes.

Raagini performance and dances are impressive. Though her character has negative shades, she still makes a big impact.

Yagna Shetty shows her talent once again, but Rishika Singh excels in one song shot in Bangkok. All the comedy actors rock in the film to best of their abilities.

Seetharam`s camera work is as usual top class. Elliruve Kushubu and Thuppa Beka Thuppa are the best songs of the album.

Watch Kalla Malla Sulla, it is a good entertainer.