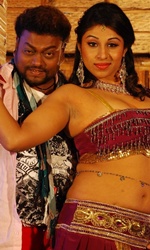 Though the title is misleading, Sadhu Kokila produced 90, which has a large presence of well known comedy actors in the Kannada film industry, is a hard-hitting message oriented film.

Director Lucky Shankar and the film`s dialogue writer Tabala Naani have worked hard to make a film that can give a positive message to the alcoholics. But the noble attempt by Shankar and Naani doesn`t make 90 a real classic.

It is purely an episode centric film where many characters, who have been victims of their compulsive drinking habits, are introduced and made to reveal their tragic stories.

The tragic episodes are narrated with fun elements to make the audience laugh, but it results in diluting the quality of the film. Many sequences lose their sheen and seriousness mainly because the intention is just to make people laugh and not to provoke them into a serious thinking. But when viewed in totality, 90 comes across as a better product compared to recent mediocre Kannada releases.

Actor Sadhu Kokila, who has produced the film, uses the best technical support for the film on the visual side. The two songs are well shot. The director has used many meaningful folk songs and qualitatively rich songs add colour to the proceedings.

The story revolves around Sadhu, a film director who is contacted by a pickle seller to make a film. When Sadhu narrates the story to the producer, he doesn`t like it.

Sadhu tries to get things write for the story and his friend Raju takes him to a bar so that the can meet variety of characters there and hear their real life stories and take inspiration to write a perfect story.

In the process, Sadhu interacts with many compulsive drunkards who narrate their own stories. He comes to the conclusion that drinking is not only injurious to health, it also spoils family life, kills survival spirit and lead the life to an extremely tragic situation.

The film`s cast boasts of quite a few comedy artists and every actor has performed with ease. But it is Sadhu Kokila and Raju Thalikote who are impress the most.

Rangayana Raghu shines as the producer, while Bullet Prakash carries his role with dignity. Veteran actor Doddanna, Mithra and Biraadar have also done their best in their respective roles.

The highlight of the film is certainly the dialogues written by Tabala Naani, which has a lot of punch and force.

There are two item songs, which is used only for commercial purpose. Pragna is impressive in the dance number Ichala Maradavaa.

90 comes out as a surprisingly good experiment despite its flaws.