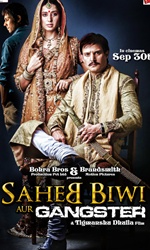 Absolute power corrupts absolutely. And the power to create cinema that takes the prevalent language of narration into the domain of the dark and unpredictable is a privilege belonging to some politically savvy filmmakers. Sudhir Mishra tops the list. Tigmanshu Dhulia follows close behind.

The manner in which Dhulia brings into play the murky, sleazy politics of Uttar Pradesh is remarkable for the fusion of lies and truth with the borderline between the two extremes simply blurring.

Sahib Biwi Aur Gangster is an audacious tongue-in-cheek homage to Guru Dutt`s timeless classic Sahib Bibi Aur Ghulam. Don`t believe the director`s protestations to the contrary. Dhulia`s film even opens with an unabashed tribute to Guru Dutt`s film with skeletons being dug out during an excavation.

There onwards there are plenty of skeletons tumbling out of secret places in the zamindar`s (Jimmy Sheirgill) bedroom and other workplaces, all leading to a series of climaxes, many of them aggressively sexual in nature.

Dhulia deconstructs and demystifies Meena Kumari`s alcohol-laden mysterious Choti Bahu from Sahib Bibi Aur Ghulam. As played by Mahie Gill in Dhulia`s new-age deconstructed version of the old film, the wife is a full-blooded sexually dissatisfied, curious and predatory creature somewhat annoying in her insistence on going against the rules of her husband`s crumbling `haveli`.

It is no coincidence that the intruder in Dhulia`s film is a libidinous over-ambitious driver whose hunger for sex and power drives him to self-destruction. As played by Randeep Hooda, he is quite the opposite of the gentle shy besotted little creature that the Choti Bahu befriended in Guru Dutt`s film.

Sahed Biwi Aur Gangster creates a world far removed from Guru Dutt`s classic, and yet the two works are miraculously joined at the hip. Almost every character from the Guru Dutt film is replicated if not parodied in Dhulia`s film. There is even Deepal Shaw playing a modern day version of Waheeda Rehan`s Jabaa from Sahib Bibi Aur Ghulam.

Waheedaji`s reaction to her new-age avatar is awaited.

Sex and politics fuse into the fading crumbling feudal world of Dhulia`s cinema, creating a potent mix of passion and politics. As the goon, who dares to enter his benefactor`s wife`s bedroom and dreams of taking his place, Randeep Hooda has the best lines and graph graph for his character. Here`s an actor who is yet to get his due.

Mahie Gill plays the desolate wife with an absolute absence of enigma. Meena Kumari didn`t quite know what she was searching for. This woman knows exactly what she wants and finally gets it through the nozzle of the gun.

Jimmy Shergill has over the years evolved as an actor of subtle skills. As the embittered husband and doddering landlord he brings to the storyboard a kind of gentle persuasiveness that goes beyond the narration. His scenes with his father`s mistress are gems conveying wry disdain for a woman who controls the resources of a rapidly crumbling feudal kingdom.

Dhulia is in the habit of bringing into play the political forces that determine human nature in Uttar Pradesh.

Saheb Biwi Aur Gangster turns progressively Shakespearean towards the end with three protagonists hurling towards self-destruction. As they delve toward doom you are left with no choice but to watch the characters as pathetic paradigms of an era that has long gone.

The crumbling sepia-toned interiors and colour tones scream out a message of live and let live. But it`s too late, Dhulia`s characters are felled by their own greed and lust.

Guru Dutt would have probably choked at this badland bawdy burlesque of Sahib Bibi Aur Ghulam. Lekin man-na padega, boss. Tigmanshu Dhulia`s homage to Dutt is saucy if somewhat uneven in tone and jagged at the edges.

I always wanted to shoot in Chambal: Kay Kay Menon

Actor Kay Kay Menon, who is gearing up for the release of his upcoming film "Phamous", says he always wanted to shoot a film in the badlands of the Chambal ravines.Kay Kay was interacting with the media at the trailer launch of the film along with Jimmy Sheirgill, Pankaj Tripathi, Mahi Gill and director Karan Lalit Bhutani here on Thursday.Read More

Based in a small town in the Northern part of India, Sahib Biwi aur Gangster is a story packed with intrigue betrayal and ambition between a beautiful Begum, her Nawab husband and an ambitious young boy.

His rival political party, belonging to Gainda Singh is on a constant mission to eliminate the Nawab and his allies, to get a hold of the administration, which has been with this royal family for decades. Eventually leaving him with just one Kanahiya who is Saheb’s most trusted and dangerous servant.

Due to the Nawab’s interest in his beautiful mistress, Begum suffers seriously from the lack of his attention and tries to put every bit of her effort into getting him to come back to her or even spend a moment of his time with her. The Nawab starts taking contract killing assignments to be able to cope up with his lifestyle and to be able to get a stronger hold over his political situation while campaigning for the elections, which becomes a difficult battle considering the loss of his allies and deteriorating financial situation.

The drama in the plot walks in when the same rival gang plant Babblo, to get information and plot the Nawab’s killing, as the temporary driver for Begum as her age-old driver meets with an accident, which was also conspired by the same group.

Begum suffering from the lack of her husbands attention and slightly hysterical due to the same gets into a sort of sexual relationship with this young driver who seems to be giving more of his time to her.

In this process, Babblo falls deeply in love with the Begum and lands up confessing of his connections and intentions in front of the Nawab. This is exactly the point where the entire drama between the Sahib, his Biwi and Babloo the gangster begins.

The story is filled with twists and turns as Biwi uses Babblo to get the mistress killed to gain back the lost attention from her husband. Babloo manages to fulfill her demand but in turn gets ambitious and wants the begum for himself and the power which Saheb now holds after he eliminates Gainda singh.

Biwi is worried since she knows that Babloo wants to eliminate Saheb, how this brutal triangle gets deciphered forms the climax of this story.