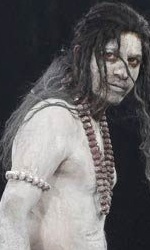 Chandru Dashavara and B. Ganapathy

"Jogayya" had raised the barometer of expectations as it was the 100th film of hattrick hero Shivaraj Kumar and it`s also a sequel to the actor`s blockbuster "Jogi". Since Prem, who had written and directed "Jogi", was at the helm of the project, so expectations were high before its release.

But alas, the film ends up as a huge disappointment to the unsuspecting audience.

The element that have caused disappointment to fans is lack of a credible story line. Its weak narration further downgrades the quality. Many sequences, which are poorly written and weakly executed, bore people.

Prem has to be squarely blamed for the film`s hotpotch narration because he penned the story and the screenplay. He has tried to mix many things in on plot without providing any detailing as a result the story fails to convince the audience.

The sequences relating to current political ramblings show his lack of understanding and analytical ability.

However, "Jogayya" can not be outrightly dismissed as an ordinary fare. Presenting his film with a high visual strength has always been Prem`s forte and he has continued to do so in this film also.

Three songs are well composed and picturised. Shivaraj Kumar once again comes with a brilliant performance.

"Jogayya" elements seems to similar to Upendra-directed "Super", but Prem has failed to bring in sophistication and realistic touch to the film. "Super" certainly made the audience think, but "Jogayya" fails completely in that regard.

Set in Bangalore, it starts with the death of Jogayya`s mother. After losing his mother, a distraught Jogayya decides to cut off his ties with the underworld, but he is much needed by politicians and underworld. Meanwhile some local dons continues their anti-social activities in the name of Jogayya.

Jogayya, who has moved to Haridwar and spends time with `aghoris`, realises that his absence has created new centre of power and people are misusing his name. So he returns to Bangalore and stays with a poor family.

He does not reveal his identity, but somehow police arrests him for all the crime. Meanwhile, the politician and underworld nexus, which are backing the government, wants Jogayya to support them.

Jogayya is shocked to see how the politicians are indulging in corrupt practices
by striking big deals. He creates awareness among people and motivates them to protest against corruption, which is marring their opportunities and creating illwill.

Shivaraj Kumar excels in his role. His body language, dialogue delivery and even styling is perfect.

The film`s heroine Sumith Kumar Atwal looks charming on screen, but she has too less space to perform in this Shivaraj Kumar-centric movie.

Pooja Gandhi has done her cameo with ease. Ravishankar makes an impact and Gururaja Hoskote is impressive too.

"Jogayya" can ben watched only for Shivaraj Kumar`s excellent performance in his 100th film.