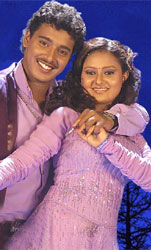 Chaithradha Chandrama, however, is not a perfect launch. The film`s story does not run on logic and particularly the sequences related to cricket lack the authentic touch.

Some of the sequences are utterly laughable too. There is a sequence when the father of the hero combats the national selectors. And a no ball is declared by the umpire after the player is on his way to pavilion. The film is too lengthy - nearly three hours - to engage the audience interest. Too much of graphics in the songs also take away from interest.

On the positive elements of the film, it has to be said the newcomer Pankaaj has worked hard to prove his credentials as a dancer and fighter. And Amoolya proves again that she has good screen presence. But she is better advised to watch her weight. Both the artists are too young to be tested for a big launch like Chaithradha Chandrama.

S. Narayan has proved his capabilities as a writer in many of his previous films like Chaithradha Premanjali, Suryavamsha, Chandra Chakori, Jameendharru and Simhadhriya Simha. But in this film his writing capabilities have not been unleashed even partially. His music composition is slightly better in comparison.

Pankaj Kumar (Pankaaj) is a young aspiring cricketer and dreams of representing the National Under-19 team. His obsessive father (Pallakki Radhakrishna) wants him to don the national colours at any cost. But Pankaaj is quite impulsive at times and this creates bottlenecks for his selection.

Amoolya (Amoolya), who faces many personal problems in her family, falls in love with Pankaj Kumar. After several meetings, both decide to elope to Kashmir. Circumstances lead Pankaj to elope with his lover on the day he is selected for the national team. The enraged father of Amoolya tries to scuttle the alliance, while the father of Pankaaj disowns his son. Finally Pankaj wins over his father and the girl. He also represents the Indian team to score a century in a match that looks like a big joke.

Pankaaj shines as a newcomer and is good in the fight and dance sequences. Amoolya looks pale and obese in this film compared to Cheluvina Chiththaara. Shobharaj, Pallakki Radhakrishna, Veena Sundar and film director Sathya have acquitted themselves in their roles.

S. Narayan could have done a little homework to create a good script for the film. Chaithradha Chandrama ends up as ordinary fare because of too many loop holes in the script.