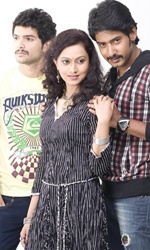 "Mr. Duplicate", directed by veteran director Kodlu Ramakrishna, is inspired by Gautham Menon directed Tamil film "Minnale", starring R. Madhavan and Reema Sen. Despite the assertions of Ramakrishna that it is original, the connections to the Tamil film are fairly obvious.

The film was later made in Hindi as "Rehnaa Hai Terre Dil Mein" starring R. Madhavan and Dia Mirza.

Nandu loves to lead a happy life but does not fit into any job. His doting father, Ram Prasad, a successful businessman, encourages him to live life on his own terms. Nandu meets Poornima and instantly falls for her. When Nandu gets to know that Poornima is engaged, he impersonates as her fiancee Vikram. Vikram arrives only to find that Nandu is his archrival of college days. But finally, Vikram realizes that Poornima too is in love with Nandu and the lovers get united.

Many sequences of the film are a straight lift from "Minnale".

The editing of "Mr. Duplicate" is not as sharp as the original`s. A few sequences have been chopped off only to reduce its length.

The songs composed by Harris Jeyaraj like "Vaseegara" and "Mama Oh Mama" for the Tamil flick became such a rage that they are remembered even today. But Mano Murthy`s music fails to create magic. Except for "Nannannu Noduththa", the other songs including "Hero Zero" fail to impress.

Though "Mr. Duplicate" boasts of top artists, it fails to engage the audience.

Two popular young heroes, Prajwal and Diganth, have worked together in the film but their fire is missing.

The film has Prajwal`s real life father Devaraj playing his reel life father but Ramakrishna does not use this opportunity to get the best from them as the sequences written for the two characters are weak and ill-conceived.

Ramakrishna has floundered in whatever opportunities he had with the terrific combination of Prajwal, Diganth and Devraj. He seems to have lost his touch with the contemporary style of filmmaking.

The film looks rich in visuals but the execution of some important sequences is mediocre.

The way the climax sequence and the football match have been shot is uninteresting.

The fun elements in the original film were enjoyable but it looks downright indigestible in the Kannada version.

Thankfully the director gets a good star cast for the film, all of whom have tried to do their best.

Prajwal and Diganth shine well in their roles but it is Devaraj who impresses with his dialogue delivery and mannerisms. Sheetal looks like a glamour doll in the film and shows her dancing prowess but needs to improve her acting talents. All the veteran actors like Ramesh Bhat, Thulasi and Sudha Belawadi have aptly fitted into their respective roles.

"Mr. Duplicate" is no match for "Minnale" but it is good for a one-time watch.