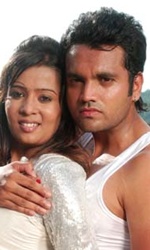 "Chinnada Thali" is a bad choice for veteran actor Devaraj who has won many prestigious awards. He should not have acted in such a bad film. Writer-director Vemagal Jagannatha Rao has delivered a dud.

In the film, Devaraj plays a cop who is a good samaritan and tries to unite lovers.

The film is not fit enough to be a television serial and the narrative is so poor that the audience would definitely regret watching it. Viewers need tons of patience to watch a film, which moves at a snail`s pace.

Mediocre efforts by the cinematographer and the editor also spoils the pace of the film. Maruti Mirajkar`s music is slightly better.

To add some commercial elements, Rao has picturised kissing sequence on actress Swathi, who also does a lot of skin show in the film.

Rich guy Vinod is in love with Vimala, who comes from a humble background. They elope to get married because Vinod`s father wants him to marry a politician`s daughter.

Vinod thinks his father may accept their marriage, but his cruel father tries to kill Vimala. Not ready to give up, Vinod`s father devises a plan to separate his son from Vimla.

On the other hand, Vimala`s father approaches his trusted friend and cop to trace Vinod. Finally, the sanctity of "Chinnada Thaali" is protected and Vinod unites with his wife.

Thilak, who showed a lot of promise in negative roles in "Ganda Hendathi" and "Meera Mohana Madhava", has failed to give a convincing performance in the lead role.

Even seasoned actors like Ravindranath and Rama Murthy have failed to give any convincing performance in their respective roles.

Technically, the film is so bad shows Rao`s lack of knowledge about the use of technology in Kannada films.

It is a waste of time to watch this film.