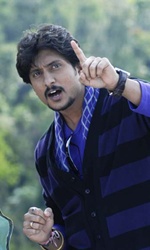 "Krishnan Marriage Story" (KMS) was actor Ajay`s most awaited film as he had spoken a lot about it. The actor, who had won laurels for his performance in last year`s "Krishnan Love Story", was expecting a big success for the venture, which has cost more than any of his previous projects.

"Krishnan Marriage Story", directed by Nootan Umesh, is not a sequel to "Krishnan Love Story" for which Shashank wielded the megaphone. Umesh worked as an assistant to Shashank on his debut film "Sixer".

More than anything else, the film has a strong and refreshing first half. Even the climax is well shot.

But the problem is that the second half is a hotchpotch and seems more like a cocktail of many sequences taken from many successful Kannada and non-Kannada films like "Hrudaya Haadithu", Telugu film "Ninne Pelladutha" and Hindi film "Prem Geet". And this has diluted the film`s quality.

One thing that can be surely said about the film is that it has a fantastic music by Sridhar Sambhram and superb camera work by Sekhar Chandru, who had earlier worked on "Krishnan Love Story".

Besides composing four good tunes, Sridhar Sambhram has also given a perfect background score for the film. The choreography in the songs "Parijatha" and "Nidde Bandhilla" are of good quality.

Dialogue writer Manju Mandavya has done a decent job. Even the artists of the film have given their best.

But the film fails because of Umesh`s shoddy work in the second half.

In the film, Krishna is an ad film producer who has a large joint family where there is a perfect understanding between the family of four brothers, their wives and children. Krishna, son of the second brother, is everybody`s favourite.

The family tries to find a suitable bride for Krishna, but somehow their attempts fail.

Krishna visits his grandmother`s place for a change and there he meets beautiful and modern girl Khushi. Krishna immediately falls for Khushi, a software engineer who has returned to her village after failing to cope up with the pressures of her profession.

Eventually Krishna and Khushi get married.

But then comes a twist in the tale - Krishna`s family learns that Khushi will not live beyond a few months. What happens after that is the film all about.

Ajay gives a decent performance as Krishna and shows his prowess in dance and fight scenes.

Nidhi looks extremely glamorous and stunning in a few dance sequences. Her performance in the climax is good.

For the debutant director, it is a lost opportunity.

"Krishnan Marriage Story" would have been a perfect entertainer, but the weak second half half mars the film`s prospect at the box office.