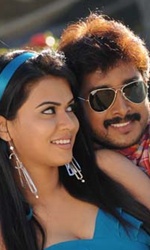 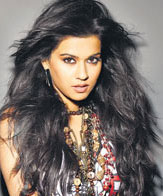 "Dhan Dhana Dhan" is a remake of David Dhawan directed Hindi comedy "Hum Kisise Kum Nahin" (HKKN), which had Amitabh Bachchan, Ajay Devgan, Sanjay Dutt and Aishwarya Rai in the cast. Despite such an impressive cast, the Hindi version enjoyed just an average success at the box office mainly because of the weak script.

Though there was a plentiful dosage of comedy sequences in the film with some good performances, HKKN could not entertain audiences.

Wasim and Nargees Babu, makers of "Dhan Dhana Dhan" have borrowed the entire plot of HKKN and have credited the story to their own production house.

If it was not enough, they have also produced the film with a low level of commitment and passion. How can you expect such a film to entertain audiences?

"Dhah Dhana Dhan" fails from the start as the comedy element dont work, the cast is imperfect and they don`t seem serious about their performances.

It is so shabbily made that you will instantly feel that director Ramnath Rigvedhi must have lost interest in the project in the beginning itself.

Ravishankar and Aadi Lokesh are playing Amithabh Bachchan and Sanjay Dutt`s roles respectively. The comedy element turns into a tragedy because of horribly bad performances.

The technical department has done so badly in the film that not even one song is likeable. Mohan`s camera work is disappointing. Dialogues lack punch and there has been no rib tickling stuff.

In the film, a well-known doctor Ravishankar is very attached to his sister Charmi, who is an aerobics teacher. But Charmi is dating Prem who is struggling to find a job and is not so serious about life.

Ravishankar finds a Malaysian suitor for his sister, but the local don Silent Sidhdha is in awe of Charmi and wants to marry her. How Prem uses his intelligence to thwart off the attempts of the doctor and the mafia forms the climax of the story.

"Dhan Dhana Dhan" is a tedious watch, better avoid it.