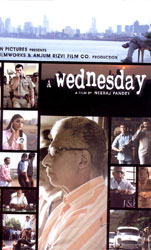 `A Wednesday` - out of the box terrorist thriller

Ratings: ***
First things first. A Wednesday is not about the train blasts that rocked Mumbai in 2005. It isn`t so much to do about terrorism and counter-terrorism as it is about making these grim socio-political facts into digestible riveting cinema.

And that`s where A Wednesday scores over Mumbai Meri Jaan and other recent films on the wrath of extremism.

Just the pleasure of watching Naseer and Anupam against the backdrop of a teeming bustling sinisterly jeopardized Mumbai city is ample reason to discard all our other misgivings about the sheer feasibility of the plot.

Cleverly the narration manoeuvres all the physical action away from the two aging protagonists to a couple of hot-blooded young cops played effectively by Jimmy Shergill and Aamir Bashir, who hurl into camera range in a meteoric rush of adrenaline to remind us that the streets of Mumbai have always created a flutter in the clutter in our films. Just go back to every film from Satya to Aamir and see what we mean.

Cinematographer Fuwad Khan captures the blood on the roads of Mumbai with a disaffected relish. A lot of the film has been shot in stylish top-shots where the terrorists and counter-terrorist manoeuvrings appear larger than life and yet miraculously shrunken in the cosmic scheme of things. Violence in this way is made both comic and cosmic.

Most of the film cracks the entertainment code through the ongoing dialogue between the cop and the master-blaster, quite in Clint Eastwood and John Malvokich in Wolfgang Petersen`s In The Line Of Fire, triggering off a thought-provoking chain of ideas on the common man and terrorism and how far the violence of extremism affects the self-worth of the middle class.

The closing lap of the edge-of-the-seat is a clever plot-defining twist, perhaps too clever for its own good. For, what we get here is terrorism turned inside out, the anguish of extremism facing upside-down. It`s an interesting but unacceptable end game, more suited to Quentin Tarantino when all the while we were looking at Pandey`s film as belonging to Mahesh Bhatt`s genre of cinema.

By the time Naseer`s eruptive enthusiasm climaxes, the narration goes into the realm of the improbable, contriving to create an atmosphere of utter escapism in a film that you thought was stubbornly wedded to reality.

But that`s where Pandey has been heading all along. His narrative hurtles towards a photo-finish where the newspaper headlines are swallowed up in a swamp of thriller-rituals that take the plot aback to create an aura of unstoppable suspense.

Sanjoy Chowdhury`s background music over-punctuates every sequence. But then that`s precisely what this out-of-the-box terrorist-thriller was looking for.

The humour, when it strikes, is like the bomb blasts. Sudden and unexpected, though a little on the grimmer side.

Veejay Gaurav Chopra as a shit-scared film star getting extortion calls is mousy enough to remind us that heroes don`t come out of the movies. But heroic movies surely do come along once in a while from the movie industry. A Wednesday is certainly one of them.

Watch it to see how cleverly the director subverts the real-life headline-driven genre of cinema into a riveting race to the finish line.

Most of all it`s the performances of the two principal actors that holds A Wednesday together. Moving away from his recent comic antics, Anupam delivers a controlled performance as a cop who has seen it all. He happily allows Naseer to take over many scenes giving his co-star some riveting reactive cues.

Naseer is back in full form after a rather embarrassing gap of cameo-commitments. Naseer in his element is an experience that needs no definition. He plays the jaded but spirited bomb-planting anonymous caller with a wry blunt and edgy sardonicism creating for his character a space that pitches his angst in the wide open loosely defined crowds of desolation in Mumbai.

A Wednesday is not quite the seamless little masterpiece on terrorism that you expected. It resorts to many wild swipes in the plot. Some characters like thedude-like computer hacker and the TV journalist, played by Deepal Shaw, give embarrassing single-note performance.

Watch Naseer and Anupam to know how a one-to-one drama works when two actors provide a psychological and emotional equilibrium from the two ends of the moral spectrum.

London schedule for 'Aiyaary' wrapped up

Siddharth Malhotra and Manoj Bajpayee to appear in Neeraj Pandey's next

After enthralling us with movies like 'Special 26', 'Baby' and 'Naam Shabana,' Neeraj Pandey is all geared for his upcoming directorial venture.Read More

Mumbai, the financial capital of India, the city that never sleeps, the city of dreams, fast paced and ever changing, home to Bollywood! A city of beauty but also a city that got scarred! A city whose foundation is slowly crumbling beneath its facade of invincibility!

`A Wednesday`, tells the story of certain events that unfold between 2 and 6 pm on a particular Wednesday in this city. Events which do not exist in any record but which deeply affect the lives of those invoved.

Prakash Rathod, Commisioner of Police, Mumbai, gets a call demanding the release of four extremely dangerous militants within the next four hours. If it doesn`t happen several bombs planted across the city would blow up. He has to make a choice between releasing the militants, who are responsible for the unaccountable damage to civilian lives and property and might even cause further irreparable damage or let Mumbai be ripped apart by blasts again.

Prakash Rathod is not a man who would give up easily. He lives no stone unturned in order to track down the man who`s held the city at ransom. He gets a team of his best men together and taps all his resources. He steps up security in all public places airport, stations, malls and multiplexes. A hacker is brought in to trace the calls and the location of the man, but they are always a step behind .Prakash decides that he cannot put innumerable lives at stake and thus hand picks two of his officers Arif Khan and Jai Singh to do the handover of the millitants. It is then that events take a wild turn. Prakash Rathod and his team are confronted with an unimaginable and impossible situation.

It is this turn of events that leaves behind an unforgettable memory!

There is a reason why it has been kept a closely guarded secret!

There is a reason why this case has no written evidence!

There is a reason..... for everthing!