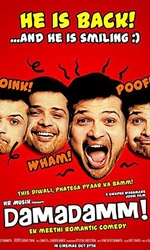 So here he is. Himesh Reshammiya is back in front of the camera. This time he moves away from the wannabe-rockstar?s image to play a working-class nerd. Himesh?s Sameer is a bit of an idiot.

So he celebrates the departure of his over-possessive bossy girlfriend Shikha (Purbi Joshi) by dancing on the steets, making weird faces at passing chicks (who should be shown reciprocating with a stern scowl if not a slap but are instead shown giggling), messing up his tidy apartment and binging on booze with his unsavoury boss who keeps giving our Sameer wrong advice on how to handle women, particularly bossy over-possessive girlfriends.

Damadam has its nice sweet wholesome moments. It?s one of those innocuous romcoms that neither leave you impressed nor cold. The heartwarming moments come on when you are most expecting them and linger on screen long enough to make you forget how annoyingly misguided a character the hero really is.

There is a ring of truth to Sameer?s self-destructive rejection of a five year old seemingly stifling relationship for a posh fling in the tempting lap of luxury with his boss? classy sister Sanjana (Sonal Sehgal).

Shah Rukh Khan had done the same in Aziz Mirza?s Raju Ban Gaya Gentleman, giving up the comfort of true love for a fling with a rich heiress. To her credit, Sonal Sehgal doesn?t play the `other woman` as a bitch.

Remarkably, Surbat Sinha?s screenplay has a believable trio of protagonists -- flawed, fumbling, all too human. But the peripheral characters are a letdown. They aren?t only sketchy but also clumsily etched into the plot.

Also the music, Himesh Reshammiya?s mainstay, is here uninspiring and often obtrusive. The track Ishq unplugged comes at an embarrassing juncture when the love triangle is in need of a solution, not a song.

What wins you over is the director Swapna Waghmare?s earnestness. She has her heart in the right place. So does the film. Some of the time. For the rest, you?ve to grin and bear the excessive zeal of a supporting cast and a music score that doesn?t know where to draw the line.

Himesh Reshammiya?s performance is that of a goofy Everyman, a bit of a messed-up soul who finally admits he needs a bullying girlfriend to get him through the complexities of life. Himesh works his performance around the character?s weaknesses and his own limitations as an actor.

It is the underused Purbi Joshi as Himesh?s overbearing girlfriend who steals the show. She imparts a sense of lived-in authenticity to her role, almost at times going beyond the script in search of her character?s lost soul. Why don?t we get to see more of this pretty talented girl in our films?

The story focuses on Sameer (Himesh Reshammiya) who has finally got his freedom when his stubby-girlfriend Shikha (Purbi Joshi) has left for a family wedding. He feels like the happiest person in the world, he parties, drinks, and even flirts with girls. He enjoys his freedom while he can, until Shikha shows back up. The rest of the story converts into a Diwali-gift for the whole family, the love bomb will blast soon, in “Damadamm!”