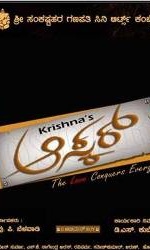 Krishna makes his directorial debut with "Oscar", a film which cannot be slotted in any genre. It is like a mix of many ghost-related films, where a dejected lover turns into a ghost to torment her lover and his new wife. And most of these films end up showing that the divine intervention ends the trauma faced by the newly married couple who suddenly become deeply religious.

The theme of these films were that neither god nor a guru will forsake his believers.

There has been several Kannada films made with this story. Many decades ago Anant Nag and Lakshmi, who were the most popular pair during those times, acted in a Kannada film titled "Naa Ninna Bidalaare", which became a big hit.

But Krishna has not focused on highlighting the element of divine intervention in the film very strongly, but has given enough indications in that direction. He has used some religious symbols, which help in warding off the ghost`s presence.

Despite a few engaging suspense elements, "Oscar" fails to make an impression mainly because of poor performance from its lead artists. All the three lead artists make such a mess of their job that viewers lose interest.

Krishna`s script is unconvincing at many places.

To be fair to the film, there are few scary moments in the film. Abhiman Roy`s music is soothing and the composer should also be complimented for providing effective background score which enhances the scare factor in quite a few sequences.

Cameraman Naveen Suvarna has put in efforts to present the film well.

The story relates to writer Vishal, who is writing a novel to win prestigious booker prize. He ahs two friends Neha and Nisha who have crush on him.

But Vishal gets married to Neha and dejected Nisha commits suicide because she feels that her friend has two-timed her. She becomes a ghost and haunts the couple.

Meanwhile, another writer, who also wants the Booker, poisons Vishal who is bedridden now. As usual Neha takes charge of the situation and pleads with the ghost to stop all its activities.

The film`s hero Ashok Kumar and the other Priyanka are totally miscast. Sangeetha Shetty has too little space to make any impression.

"Oscar" fails to make an impact. The film is a good learning experience for first time director Krishna who may have to work harder to present his stories in a refined manner.