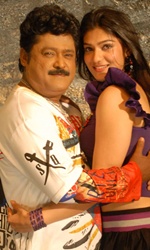 Kannada film actor Jaggesh certainly qualifies to be one of the most talented comic artistes in the country today. Starting from scratch 25 years ago, he is today a treat to watch. His recent film "Double Decker" once again establishes his credentials as a great entertainer of the industry.

"Double Decker" is a remake of Hindi film "Sandwich", written and directed by Anees Bazmee and released in 2006. The only change in this Kannada remake is Jaggesh`s brand of thoroughly enjoyable comedy. Otherwise, the story is just old wine in a new bottle.

It is surprising as to why the makers of "Double Decker" chose to remake a flop like "Sandwich".

Despite some double meaning dialogues here and there, the film scores on the performances of Jaggesh and two young child actors.

The story looks stale, the twists in the screen play are too predictable and even the music is ordinary. Director Vasu has just copied frame to frame the sequences of the original film and has the courage to credit himself with the screenplay of this film.

Even the two leading female characters, with their garish make up, fail to make any impression.

Paramesh is a story writer in the film industry and is very much liked by a rich girl Parvathy. Her father opposes Parvathy`s closeness to Paramesh and arranges for her marriage with his partner`s son.

Meanwhile, Paramesh rushes to his village to tend to his sick mother. But his mother forces him to marry Ganga, the daughter of a rich man whose son agrees to marry Paramesh`s handicapped sister.

He then returns to the city, only to find that Parvathy is planning to commit suicide as she is opposed to the marriage arranged by her father. Paramesh is forced to marry Parvathy as well.

There is another twist in the tale when Parvathy`s father is killed by his partner`s son, who later meets with an accident.

Paramesh now leads a double life, which creates many problems. Not only that, his two wives give birth to identical-looking boys, who also create complications for their poor father.

Meanwhile, a look alike of Paramesh too enters the scene to add some more confusion to the proceedings.

How Paramesh resolves all the complications in his life forms the rest of the story.

Veteran actors Avinash, Shobharaj, Chandrashekhar have performed their roles with ease. P.K.H. Doss` camera work is really good, but the other technical aspects of the movie are just ordinary.

Watch "Double Decker" if you are an ardent Jaggesh fan. His Jim Carrey antics are sure to entertain you, even though the film is otherwise just an ordinary fare.