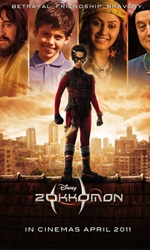 Heart-warming performances and noble intentions do not make great cinema. This one falls short of expectations, mainly because of the poor special-effects and the failure of the plot to take off. To imagine a film about a flying hero without convincing technique to make the flight of fancy believable, is to imagine a grounded aircraft waiting clearance on a foggy afternoon when nothing in the skyline is visible.

As Zakkomon, Darsheel just doesn`t take wings. He has great charm, no doubt. And his performance is more crafted and honed than it was in Taare Zameen Par. Sad to say the material meant to support him is frail and feeble. The effort is noteworthy for the conviction that the two principal actors, Safary and Kher, are able to impart to a film that seems hellbent on messing up its own prospects.

All said and done Zokkomon in unable to rise to the occasion. Touted as a super-hero film with the youngest super-hero in the world, it just doesn`t provide the young hero the space to spread his wings. The mask gets muzzled. The cape is clipped in the wings.

Darsheel Safary in the title role looks every inch the self-styled saviour of the world. He takes the part seriously. But doesn`t allow it to trip over in self-importance. He gets ample support from Anupam Kher in the two roles as an evil uncle and the scientist. The two actors seem to get the point of doing a film about a 14-year-old flying hero. If only they were better supported by the technical department.

The ineptness of the special effects is surprising considering the film comes from the reputed international producers Walt Disney.

One wouldn`t like to see Zokkomon as a wasted effort. It pushes the envelope a little towards the right direction in providing entertainment for kids. Through Darsheel`s endearing screen presence, the plot is able to overcome its inherent deficiencies and connect with young minds.

The fantasy element, so essential to propelling the plot ahead, is marred by a discernible lack of funds. But Darsheel in the inspiring company of his Anupam Uncle and his perky co-star Manjari Phadnis seems to be determined to have fun at a party where the arrangements are not quite what the guests expected.