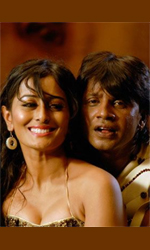 Director S. Mahendar, who makes a comeback after nearly three years, was expected to deliver something fresh with his new film, if not something out of the world. But he effortlessly disappoints the audience with his latest film Veerabahu which has an age-old story and narration.

The film is nothing but an illogical plot, loaded with some forced action and sentiments, not to forget the deathly pace of narration.

Mahendar has delivered many hits in the past, and it is rather surprising that he can dish out such an incoherent and utterly irritating film that has a restless, yawning effect on you.

Mahendar`s first mistake is to give Vijay a new image. The actor overacts, so much so that his sobbing sequences are an endless drab.

Not much can be said about the production values of the film as well as it bears the look of a bygone era.

Looking at some of the sequences of the film, one gets a sense of urgency on the director`s part to wrap up the shoot at the earliest.

Vijay plays Veerabahu, who is brought up by a grave digger. He is in love with a Brahmin girl Devi. Their growing love becomes the cause of sleepless nights for the girl`s parents. They take police`s help to prevent him from meeting her.

Veerabahu is sent to jail on false charges. However, this doesn`t deter Devi from meeting him even in prison. Her enraged parents decide to marry her off, but in a dramatic return, Veerabahu storms the marriage hall and takes her to a forest.

The police are on a hot chase of the young lovers. Devi is killed after which Veerabahu digs a grave for her. He kills himself and the couple`s love is sealed together in the grave.

Hari Krishna`s two good music compositions apart, there is nothing much to talk about the music.

Watch Veerabahu only if you don`t have any alternative.