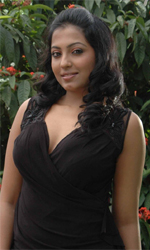 The story of "Vaarevah" is inspired by Mel Gibson starrer "What Women Want" where the protogonist can read a woman`s mind. What happens to him and the people around formed an interesting comical plot, which was hugely entertaining.

The imagination of the protagonist`s wife to see her husband in various roles of Vishnu is one of the additions in the plot of "Vaarevah".

"Vaarevah" is an engaging film that keeps the audience in splits mainly because of Komal Kumar`s performance. The film has been shot mainly in Uttara Kannada district, which gives it a perfect backdrop.

Another factor that impresses is the crisp dialogues written by Shankar Bilemane and Magesh. Cameraman Ajay Vincent`s beautiful visuals are another high point of the narrative.

But the music is not all that good. Comical situations need good music. The use of songs from Vishnuvardhan`s movies does not help either. Many sequences would have fallen flat but Komal Kumar saves them with his facial expressions and body language.

The story revolves around Adi aka Adesh Deshpande who works in a Travel Agency. He is submissive to the dictates of his female boss and the female members of his family including, his mother and grandmother, dominate him too.

He loses his girlfriend because of his timidness. He later marries Roopa, an assertive girl who imagines her husband to be legendary actor Vishnuvardhan.

Adi realises he has the skill to read a woman`s mind. This leads to piquant situations for him, though his wife enjoys them. Finally, Adi meets a psychiatrist who advises him to use this skill to get positive results.

He is able to stop an attempt to blow up a bus and a mall by a woman terrorist and even gets appreciation from the government agencies.

It is a Komal`s film all the way as he tries to infuse laughs in every moment of the film. He once again proves his exceptional talent in essaying comedy oriented roles.

All the other comedy actors have performed well.

Except for Ajay Vincent`s competent work behind the camera, the film looks weak on the technical front. "Vaarevah" could have been a better film with an improved presentation.