Huli is a Kannada - movie directed by . Starring . 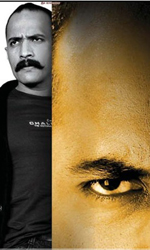 "Huli" is an another trademark of Om Prakash Rao`s films made in his signature style. It has the right mix of commercial elements with space for many sequences lifted from non-Kannada films. Thigh thumping heroic dialogues are sure to draw whistles from the front benchers.

But don`t go by the logic.

Can you imagine an ACP fighting with a minister in the police station and even beating him to pulp? The same ACP propping up a school teacher to stand for a by-election to fight against the minister`s wicked brother and even allowing the new political entrant to win the elections. Well, this can happen only in Rao`s films. If you are a logically inclined person, then this film is certainly not for you.

"Huli" is an addition to Rao`s list of masala films. He has made several films with police officers as protagonists, featuring top actors like Darshan, Sudeep, Devaraj and even Malashr. In all these films, the police officer has a larger than life image and clearly is the master of all, sharing his concerns with what is happening around. But the narration of all these films were stereotyped and it remained the same.

"Huli" is much like his previous films like "Ayya", "Hubballi" and "Kiran Bedi", which used the same type of commercial elements that were somehow lapped up by the audience to some extent. The only difference in Huli is that he has picked up Kishore to don the police uniform while performing like other artistes who have worked in Rao`s films. Kishore has already established his credentials as a character actor in Kannada and Tamil films and has even won a state award for the Best supporting actor`s role.

Despite the illogical script, the film does not have a dull moment. Rao has presented his hero nicely with well-composed shots. The dialogues have punch and the fights choreography by Palani Raj is outstanding.

Chandrappa Huligeppa is a strict and a dynamic ACP who is prepared to take on any powerful political and criminal nexus. He is posted to Mysore where he has to take on corrupt minister Jayaraj whose brothers are creating havoc in the city. Chandrappa arrests Jayaraj`s henchman and controls all his illegal activities. This brings him in direct confrontation with the minister and his rowdy brothers.

Chandrappa`s heroism inspires television reporter Preethi who falls for him. With her help, the dynamic police officer exposes the minister`s shady activities through a video. This enrages the minister whose henchman even kills Chandrappa`s mother. But the court does not implicate the minister with the video evidence. Several people in the city gather courage and storm the court to give evidence against the minister.

Kishore shines in his new role as a lead actor and has enjoyed his character. Jennifer shows lot of glamour quotient in the film. Shobharaj makes a very good impact in the villain`s role in his style and mannerisms. Veteran artists like Sreenivasa Murthy, Sumithra, Avinash and others in the film have also done well.

Background music by Abhiman Roy stands out though the song composition is not at par with his work in other films. Camera work by Manohar is appreciable.

If you would like to hear some roaring dialogues, then you may like "Huli" despite many repetitive things.