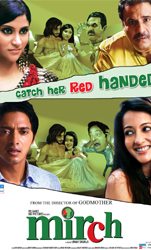 "Mirch" is meant to be a `tikhi`, spicy and delectable account of sex, stolen pleasures and furtive philandering during times of day-to-day stress. Instead it turns out to be one of those half-cooked exotic dishes, more tempting for what it promises than actually delivers.

Vinay Shukla`s last film "Koi Mere Dil Se Poochhe", which came eight years ago is best forgotten. However his film prior to that "Godmother" stood tall and imposing primarily because of Shabana Azmi`s preponderant performance as a politician in rural Gujarat who rips the male bastion apart with her no-nonsense approach to life and politics.

"Mirch" is about the politics of sex. Set in two different time zones, the contemporary and `period`, it takes potshots at the male gaze as it falls on female sexuality. Each of the four stories has a protagonist, played by Raima Sen and Konkona Sen Sharma in two stories each, with a high libido level that they do nothing to hide.

In each story, the woman is caught red-handed by her husband doing `it` with a lover. How the sexually-liberated woman in each story wriggles out of the bedroom crisis forms the core comicality in the quartet of stories.

The four stories, apparently derived from the ancient Panchtantra tales and their designedly delicious denouement are neither convincing, nor funny enough to be outrageously fable-like. The stories just about manage to bring a smile on our faces.

Not that Shukla can be faulted for his intelligent and astute handling of such an audacious idea. Strong sexual gestures specially in a woman make for very unpoetic cinema. Love when linked to lust tends to lose its lyrical lustre.

Shukla shoots his two heroines with a certain sensitivity, although there`s not much room in the satirical tales of cuckoldry for subtlety he builds room for tender touches and fleeting moments of arresting intimacy.

Raima`s large limpid eyes lend a certain grace even to her character in the past and contemporary times. However Konkona`s performances in her two tales suffer for the lack of inherent grace in the characters. And the actress doesn`t seem to be enjoying the process of playing these `naughty` characters.

In her `period` piece, Konkona cajoles her royal husband (Prem Chopra) to climb up a tree to watch her making love with the senapati.

How much fun for the actor and how funny for the audience can such a situation be?

Interestingly, Shukla has cast Arunodoy Singh as the film`s resident sex object. The female protagonists in three of the stories are shown lusting after him when they think their husbands are not around.

To create a certain distance from the preposterous parodic premises, Shukla creates a film-within-film format whereby a young struggling idealistic filmmaker (Arunodoy) and his girlfriend (Shahana Goswami) try to convince a wily producer (Sushant Singh) to produce a film which has plenty of sex, humour and drama.

The stories that the young filmmaker in "Mirch" tells the cynical producer are the stories that we the audience see the not-so-young filmmaker Shukla tell with a blend of whittled-down passion and half-formed sensitivity. Some of it though not all, is interesting. As for the theme of creative compromise that triggers off the four-storeyed plot, is "Mirch" really liberated from those compromises?

The question acquires an added meaning when Mahie Gill shows up to perform an item song choreographed by Saroj Khan at the end.

Maanav is a struggling filmmaker who is unwilling to compromise on the script he has written. His girlfriend Ruchi, a successful film editor, arranges for him to meet Nitin, a film producer. Nitin likes the script, but is not very sure of its commercial prospects. Maanav then suggests a story from the Panchtantra:

A woman is caught red-handedwith her lover by her husband and yet,shae manges to wriggle out of it scot-free!

Nitin loves the story, but finds it too short for a feature film. Maanav then creates three more stories based on the same premise: in a way, the Panchantra story travels in different versions to the modern times through the film. The four stories are woven together by a common story. Mirch itself echoes this structure, with four stories mingling with the main narrative.

The message is simple - if you have your wits about you, you can salvage even the most impossible situation.

At a deeper level, Mirch is about the gender equality in relationship; and at a still deeper level, it is about how an artist finds creative freedom in today`s mercantile world? 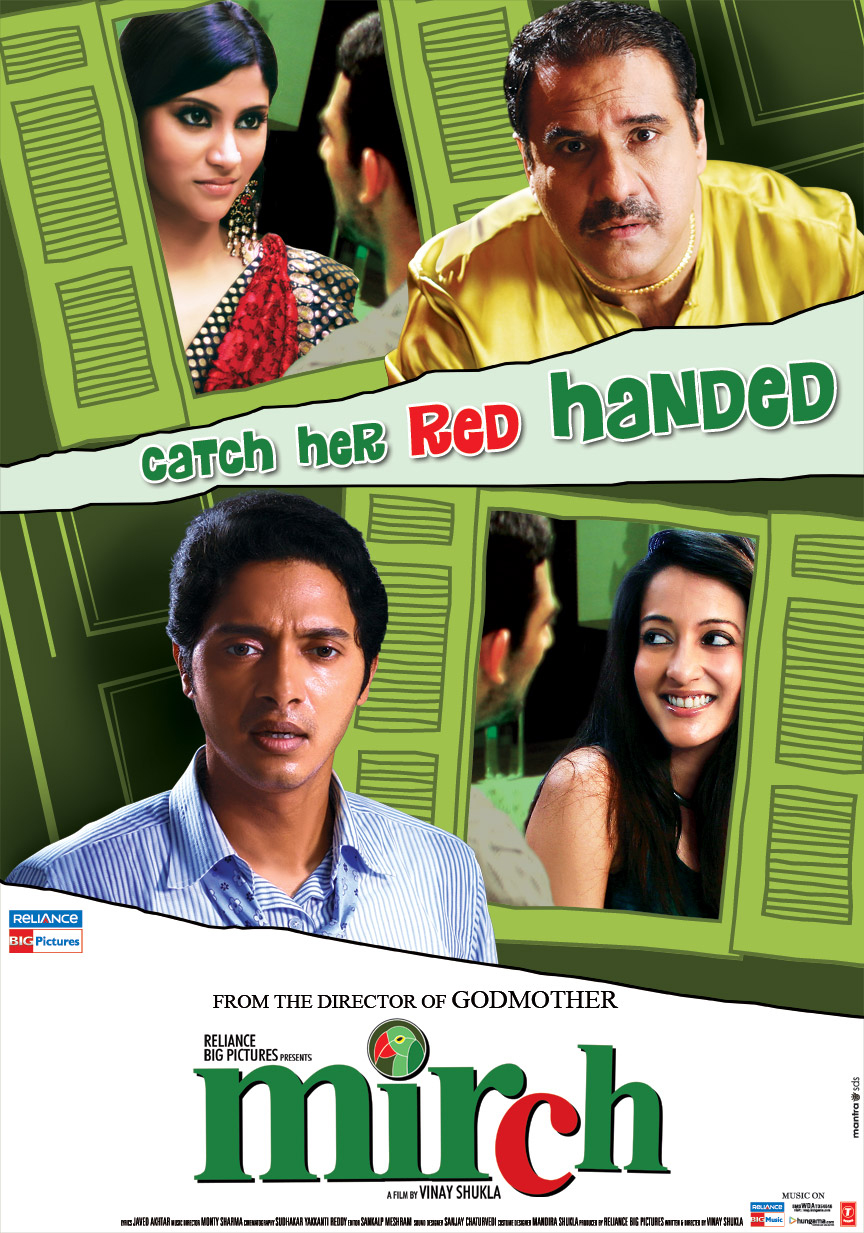 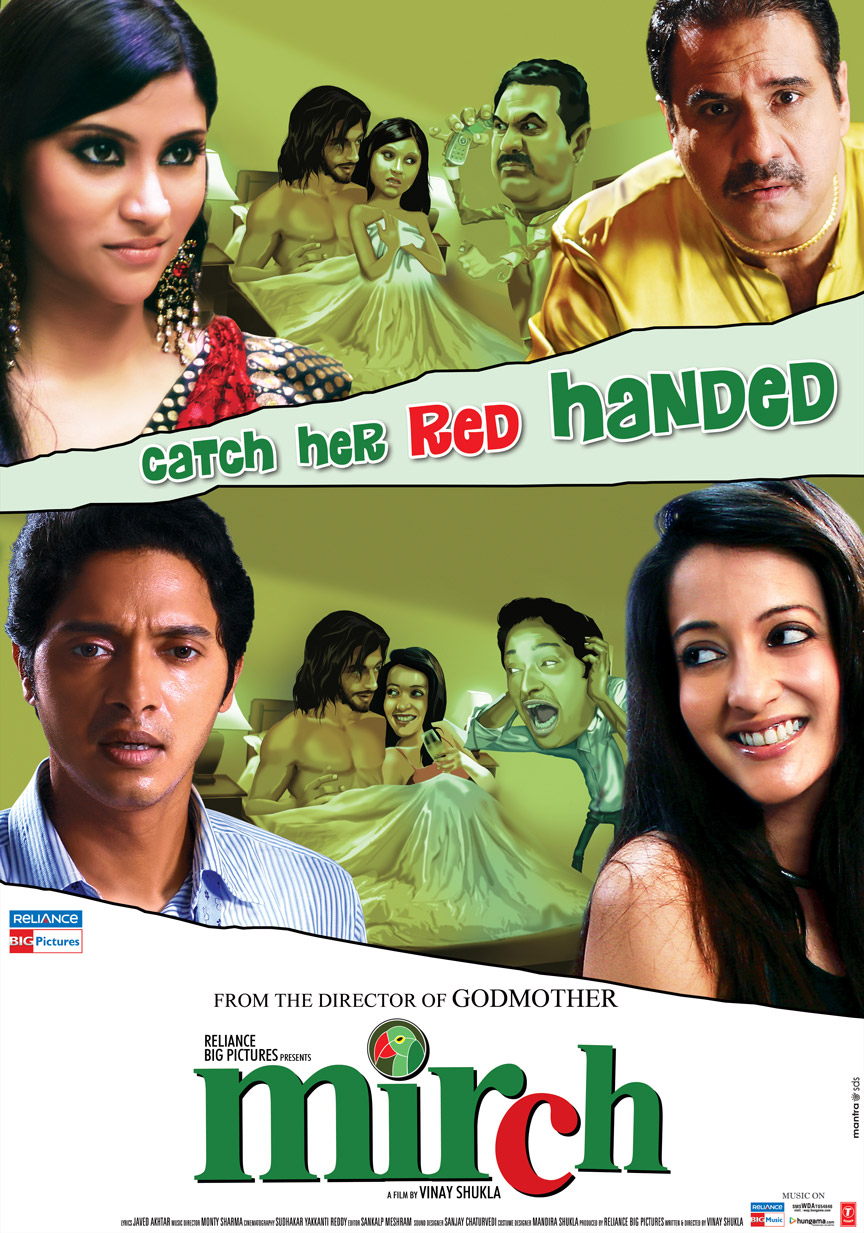