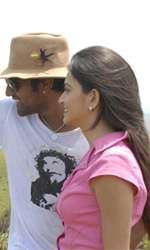 Chiranjeevi Sarja made his debut with "Vaayuputhra" and showed a lot of promise in dance and action sequences, but his performance was not so good. The same thing was observed in his second film "Gandedhe", which also lacked a neat screenplay. But in his third film "Chirru", he has shown improvement in the role of a helpful, cheerful, romantic guy.

He is damn good in action and dance sequences and shows that he can improve his acting skills fast. But he still has a long way to go.

"Chirru" does not boast of a fresh story. The content seems to be a ready mix of several films, but the presentation is really good and engaging. Though the film drags in the first half, post interval its pacy and there are many attractive things that makes it an interesting watch.

Mahesh Babu, who had fallen deeply in his slipshod work in "Abhay", bounces back with a neatly-packaged entertainer to regain his competence as a writer and director. He scores well in dialogue department, particularly in the last few seqeunces.

New find Kriti Kharbanda looks ravishing in song sequences. She is good at dancing, but needs to improve her acting skills.

In the film, Chirru gets a job in a music firm in Bengaluru and there he meets Madhu accidentally. She is the daughter of the Home Minister.

Chirru bumps into Madhu on several occasion and it creates problems for him because the Home Minister`s henchman mistakes him as her lover. Meanwhile, Madhu is dating Deepak and she even introduces her lover to Chirru. But the Home Minister`s associates are unaware of Madhu and Deepak`s relationship. They try to threaten Chirru and even attack him.

Chirru is unable to understand why he has been targeted. He loses his job because he fights with the Home Minister`s `chelas`. When a frustrated Chirru tries to return to his native place, he finds that Madhu is being chased by her father`s henchman.

Chirru saves her and his mission changes now. What happens to his sincere attempts to unite Madhu and Deepak forms the rest of the story.

Among the character artists it is Rangayana Raghu who fares well. His performance in the climax sequence is sure to touch heart strings. Bullet Prakash is wasted in the movie.

Music is one high point of the film and Giridhar has certainly emerged as a talented composer. Three songs - "Ille Ille Ello", "Nanna Kannallidhe" and "Shambo Shiva Shankara" are sure to impress audiences.

"Chirru" is a well-packaged entertainer. Go for it.