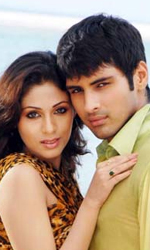 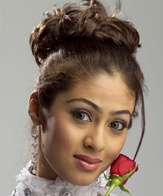 Journalist-turned-director Indrajith Lankesh returns after three years to make another fun film which carries his signature style. His earlier films were surely high on style and glitz quotient, but as far as story content was concerned, it could be surely called a remix or collage of some Bollywood blockbusters and other non-Kannada films. His new film, Huduga Hudugi, is no different.

What you see in the film is just good-looking glamour girls dancing on various numbers. Indrajith himself shakes a leg or two in one of the promotional songs of the film. Actress Bieanca is also seen in a climax song.

Sada, the heroine of Indrajith`s earlier film Monalisa, shares screen space with Dhyan in a few sequences and is also seen in a visually enticing song shot abroad. Two other heroines, Sanjjana and Anita, also get their share of screen space but it is Lekha Washington who gets the biggest piece of the cake.

The main problem with Huduga Hudugi is its incoherent storyline. It could be easily described as a remix of Jaane Tu Ya Jaane Na, Kuch Kuch Hota Hai, Aamir Khan starrer 3 Idiots and Hollywood film The Ugly Truth.

Since there is no strength in the story, Indrajith focuses on the oomph factor that fails to sustain audience-interest after a point. However, the comedy sequences featuring Sharan and Rangayana Raghu bring in some relief.

Chocolate boy Dhyan plays the role of Sachin -- a popular TV anchor. He hosts a hugely popular show along with co-anchor Sonia -- played by Lekha Washington. Both of them are carrying their own baggage. While Sachin has had a stint with heartbreak, Sonia`s disappointment stems from refusal by a rich guy to marry her.

Sachin tries to bring some happiness to her life and in the process they get closer. Sonia comes to term with the fact that Sachin is the best guy for her. But will she be able to get Sachin? You would need loads of patience to find the answer.

Both, Dhyan and Lekha Washington, fail to look the part, though both of them look cute on screen. Ileana certainly sizzles in a song while Sada shuns all her inhibitions to expose in a song shot on a beach.