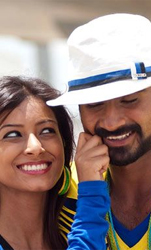 "Yaksha" is produced by T.P. Siddaraju, who made blockbuster movie "Duniya". The film hogged limelight when National Award winning actor Nana Patekar agreed to make an appearance in a special role - this is his first Kannada film.

But otherwise "Yaksha" is just an ordinary revenge saga with the usual songs, fights and nothing spectacular to write home about. It cannot be compared to Siddaraju`s previous films.

"Yaksha" starts off well and the stylishly made film initially gives an impression that the audiences are in for a big treat. But as the story moves on, it disappoints as director has messed up the storyline.

The film drags on and audiences are disinterested by the time it reaches interval. Nana`s entry brings in some respite and for 30 minutes it is a treat to watch the great actor despite his indifferent dubbing work.

Once Nana makes an exit, the film again falls into its formulaic trap with predictable and dull sequences diluting the impact.

What brings some relief is two beautifully picturised songs including "Om Namaha", which was canned in Bangkok. Music director Anoop Sileen has composed some racy numbers for the film and cinematographer Chandrashekhar has also done a good job in capturing stunning visuals.

The quality of technical work has improved in recent Kannada movies and in the film too it is visible.

Ramesh Bhagawat has borrowed ideas seen in films like "Drohakaal" and "Chal" where the main characters infiltrate into the enemy camp.

The narrative shows that Yaksha Pulikeshi is a trained magician and uses his skills to get clsoe to notorious don Machchendranath Poonja. After Yaksha`s entry into the gang, Poonja`s several trusted henchman are killed under mysterious circumstances.

By the time Poonja finds out that Yaksha is the son of police officer Pulikeshi whom he had killed, it is too late for him to fix things.

Despite giving a hit, Yogish has yet to learn nuances of acting. However his efforts in the dance and fight sequences are impressive.

Nana Patekar makes a good screen presence but his diction and dialogue delivery should have been corrected while dubbing. Atul Kulkarni is really menacing as a villain. The film`s heroine Ruby Pariwar shows her prowess in two songs, but otherwise she had nothing much to do.

Talented artists like Master Hirannaiah and Kishore have not been utilised properly. Komal`s comedy fails to bring in laughs, it rather irritates.

Except for its dance picturisation and good visuals, "Yaksha" is an ordinary fare which can be enjoyed by Yogish`s ardent fans.