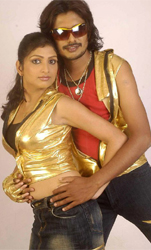 
Director Kurudi Banakar had claimed that he has narrated the woes of a dejected lover in his first directorial venture "Vichitra Premi". He had also said that his deep interest in literature had helped in the film.

But after watching Banakar`s "Vichithra Premi", one wishes he had remained just a literature enthusiast and had not dabbled in filmmaking.

There is no continuity in the story and narration. As you watch the film, you realise that that Banakar seems to have faced a dilemma - whether to use the regular formulaic incidents in his narration or just focus on the story.

The result of this confusion is clearly visible in the proceedings of the film as it tends to drag right from the beginning. And except for veteran actors like Ramakrishna, Renuka Bali and comedian Janardhan, the rest of the artistes display their inexperience in the acting department.

Every sequence in the film leaves you bored and disappointed. Gandharva`s music, however, is the saving grace. Two of the songs are very lively and likeable.

The story of the film revolves around Arun, who comes to the city from a village to study medicine and he falls for the good-natured girl Swapna, who too likes him.

But then comes a villain who makes many attempts to break the alliance. This cliched narrative looks laughable at times.

Then Swapna goes missing and a distraught Arun goes in search of her. Arun finds Swapna wandering aimlessly on the streets and learns that she has lost her mental balance. In the end, the hero himself turns a lunatic.

What seems highly unnatural is that the heroine`s mother does not show any signs of anxiety even after her daughter goes missing for three days.

The story proceeds without any convincing screenplay. Ravi and Divya Sridhar, who have been introduced in the film, will surely have to improve their acting skills in forthcoming movies.

Only Ramakrishna displays some maturity in the role, which has not been well crafted.

Watch "Vichitra Premi" at the risk of getting bored.