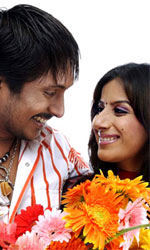 At a time when the Kannada film industry is churning out mediocre and below average films, even an ordinary film with a good story and neat presentation will stand out.

Despite some good technical work seen in films, there is a dearth of meaningful cinema. The industry is flooded with remakes and meaningless films that often test audiences` patience. But a film like Taj Mahal makes you feel that there is still some hope.

Taj Mahal is a classic presentation from debutant director Chandru who has proved his mettle both as a writer and director in his first attempt.

He has certainly carved a niche for himself through the film that has some exceptional performances and stunning technical work that will take the film to greater heights.

Even before its release, Taj Mahal had made news thanks to the popularity of the songs composed by Abhiman. It was a hugely awaited film and its contents meet pre-release expectations.

Taj Mahal has a wafer thin storyline, but the execution is tight. The twists and turns in the film look extremely logical and true to real life incidents. It has romance blended well with sentimental sequences and a little bit of comedy too.

Apart from direction, the director has given lot of importance to cinematography and music too.

Chandru has presented the film with a very good message to youngsters who are losing out on their future by focusing on puppy love and self-indulgence. The film makes a good impact with a touching climax sequence, which will make the audience think and introspect.

Ajay stands out with his brilliant performance, which is matched by Pooja`s histrionics. Rangayana Raghu, Suresh Mangalore and Padmaja Rao have also done well in the film.

A well-made film, Taj Mahal is a must see for today`s youngsters and their parents.