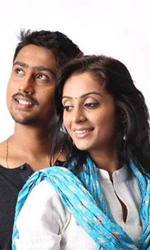 A rich producer, an ad filmmaker as director, an assistant to a top class cameraman working behind the lens, a popular television anchor as hero, a known actress and two models as the three heroines of the film...The expectation are certainly high from such a film.

But unfortunately "Hrudayadhalli Idhenidhu", which has an assembly of talented people in the technical department, ends up as a visual treat, but not a well-made film.

Despite being an ad filmmaker, director Sivan has not tried to present a credible story but seems to have just focused on the visual presentation of the film. So you see good frames and pleasing colours in the background that are the result of good camera and art work.

The picturisation of songs are good but they do not make any impact on the continuity of the story. Sivan has amateurishly concocted a few sequences and incidents to write a meaningless, run-of-the-mill story. The narration is so confusing and dragging that it tests the patience of the viewers. There is not an iota of freshness in the script.

The long-drawn dialogues may even sometimes annoy the viewers. The lead actors could have been far more expressive and emotive though Malayalam girl Monica fit into her role well.

The two model actresses look hot in the song sequences...but that`s about it.

The final product comes out as an ordinary film despite big money being spent on it.

But the movie does have its positive elements. Thyagarajan`s camera work has to be really appreciated. An assistant to well known cameraman Rathnavelu, Thyagarajan has done a fantastic job behind the camera.

The music of debutant composer Dharma Prakash is also impressive with the song "Nodu Baa Cheluve" creating quite an impact, specially since it has been choreographed well too.

The story starts with Santhosh, a newly employed software engineer belonging to a middle class family, getting engaged to Geetha, who is a family friend`s daughter. Though Santhosh is under pressure for an early marriage, he pleads for a one-year gap and goes to Bangalore and takes up a job there.

Once in the big city, he falls for an ultra modern girl, Priya, and even proposes to her. Meanwhile, Priya`s relative Kaamini falls in love with Santhosh and wants to marry him.

The story then plays out through many confusing flashbacks and in the end, Priya marries her friend Vivek and Santhosh marries his fiancee Geetha.

Rahul, who is a popular anchor in Udaya TV, needs to improve his acting abilities, though he looks good and does a fine job of the song sequences. His can surely better his expressions.

Of the three women, Monica, who plays the character of Geetha, has a negligible role, but she is effective in the little opportunity provided. Less said about the two other heroines is better.

Rangayana Raghu, who plays the hero`s father, is used only for the comic element.

While "Hrudayadhalli Idhenidhu" is technically top class, the film is an ordinary fare with a bad script.