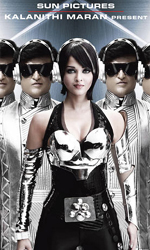 Those in the know are aware that `superstar` Rajnikanth is perceived to be in the image of god. Rajni makes fewer mistakes during the course of a film, than god. In "Robot" this perception is taken a step further as Rajni creates a robot - in his own image.

Robotics scientist Vashikaran (Rajni) creates a humanoid robot Chitthi (Rajni). After Chitthi`s inability to feel causes him to be rejected from inclusion in the Indian Army, Vashikaran tries to create feelings in him, and thanks to a freak of nature, succeeds. Only it causes problems, as Chitthi falls in love with Vashikaran`s fiancee Sana (Aishwarya Rai). As the creator and creation are locked in a jealous battle against each other, the jealous robotics scientist Dr. Bohra plans to misuse Chitthi for wrong objectives.

Anyone who has seen a Rajnikanth film understands that often it is not the story that makes the film a success, but Rajni`s antics. There are plenty of them in the film. And, for once, his conception as a robot gives Rajni the logic, to lack logic.

There are gravity defying stunts, shooting with a finger, running horizontally at high speed on the side of a train, flying cars and bikes, corny but hilarious dialogues -- e.g. after grabbing and pointing scores of guns at the police, he says `Happy Diwali` before firing a salvo of bullets; or when the robot is asked his address and gives his IP address. It`s not just god, the universe and its logic itself is recreated in the film.

Director Shankar who has a penchant for double image, multiple images and split images of his heroes returns this time with hundreds of images of Rajnikanth. The inspiration of Hollywood, most predominantly the "Matrix" trilogy (stunts choreographed by Yuen Woo-ping of "Matrix" fame), "The Mask", "I, Robot", and many Frankenstein movies are evident, but not overbearing.

Where Shankar scores is the ingenious conception of stunts. The allegedly `poorer` cousin of Bollywood, the south Indian film industry, has been growing leaps and bounds in the special effects department. And with a little help from Hollywood, like in "Robot", it soars.

"Robot", however, cannot boast of good music, so crucial for an Indian film. A.R. Rahman`s decision to rely on robotic sounds, which we have heard close to three decades back in films like "Robocop", fails to inspire. He could have at least conceptualised them more intelligently.

The Hindi dubbed version is saved by Swanand Kirkire`s translation that prevents the dialogues from becoming jarring like previous dubbings of South Indian films. Yet, he could not salvage the songs, whose gibberish lyrics are seemingly out of a time warp from films in the 1990s (remember the Prabhu Deva starrer "Kadhalan" again directed by Shankar with music composed by Rahman).

Aishwarya`s character is as conventional as expected. She`s the chaste love interest, the damsel in distress who has time and again to be saved from being raped, and who is nothing more than eye candy.

Two words begin with the letter `R` and are synonymous: Religion and Rajnikanth. A third has now been added to cinema folklore, `Robot`. And with the largest number of prints ever for an Indian film and a global release, this sexagenarian actor might still enter world cinema folklore. After all, Rajnikanth can make no mistakes.

Tamil superstar Rajnikant is set to hold a special screening of his new film "Robot" for the Bachchan clan. Read More

Purpose - to help the society

Special features - A human who is not born  but is created. He can dance , sing, fight, is water and fire resistant. He can do all that a human can and more. He feeds on electricity. He takes instructions literally. Where a human can lie to save himself this andro-humanoid robo chii cannot lie.

Trouble shooting - where he has a razor sharp memory and can memorize an entire telephone directory by just running through the pages. He cannot understand human emotions. Dr.Vasi upgrades Chiti`s processor and stimulates human emotions without realizing the repercussions. Chiti gets transformed. He can now feel, and the first feeling that he discovers is love

Will this love come in the way of Dr. Vasi`s purpose of creating Chiti?

Will Dr. Vasi`s own creation destroy him? 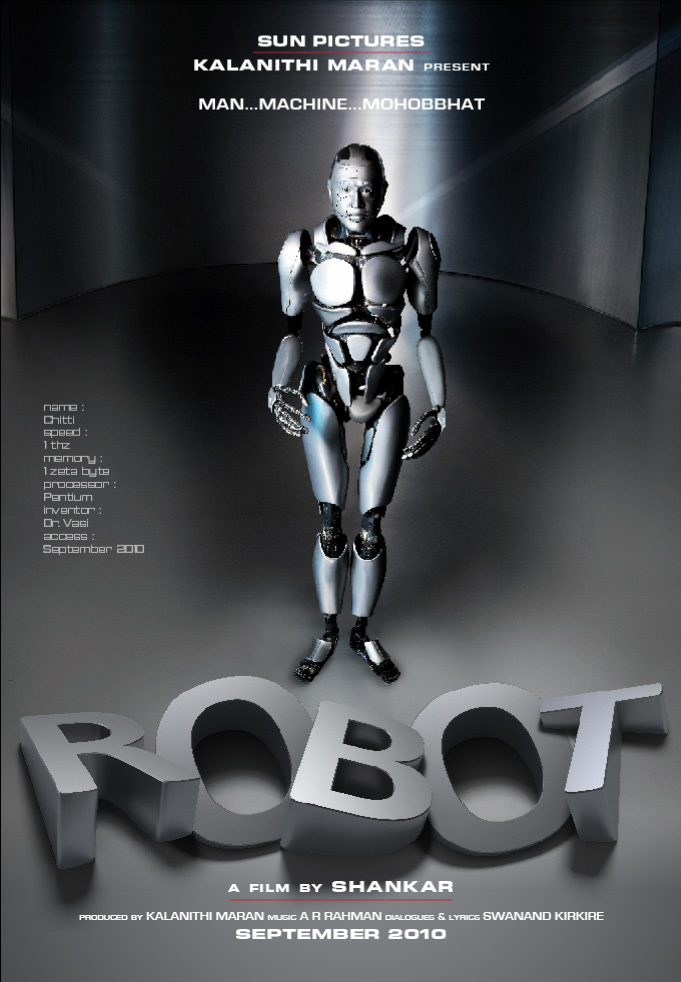 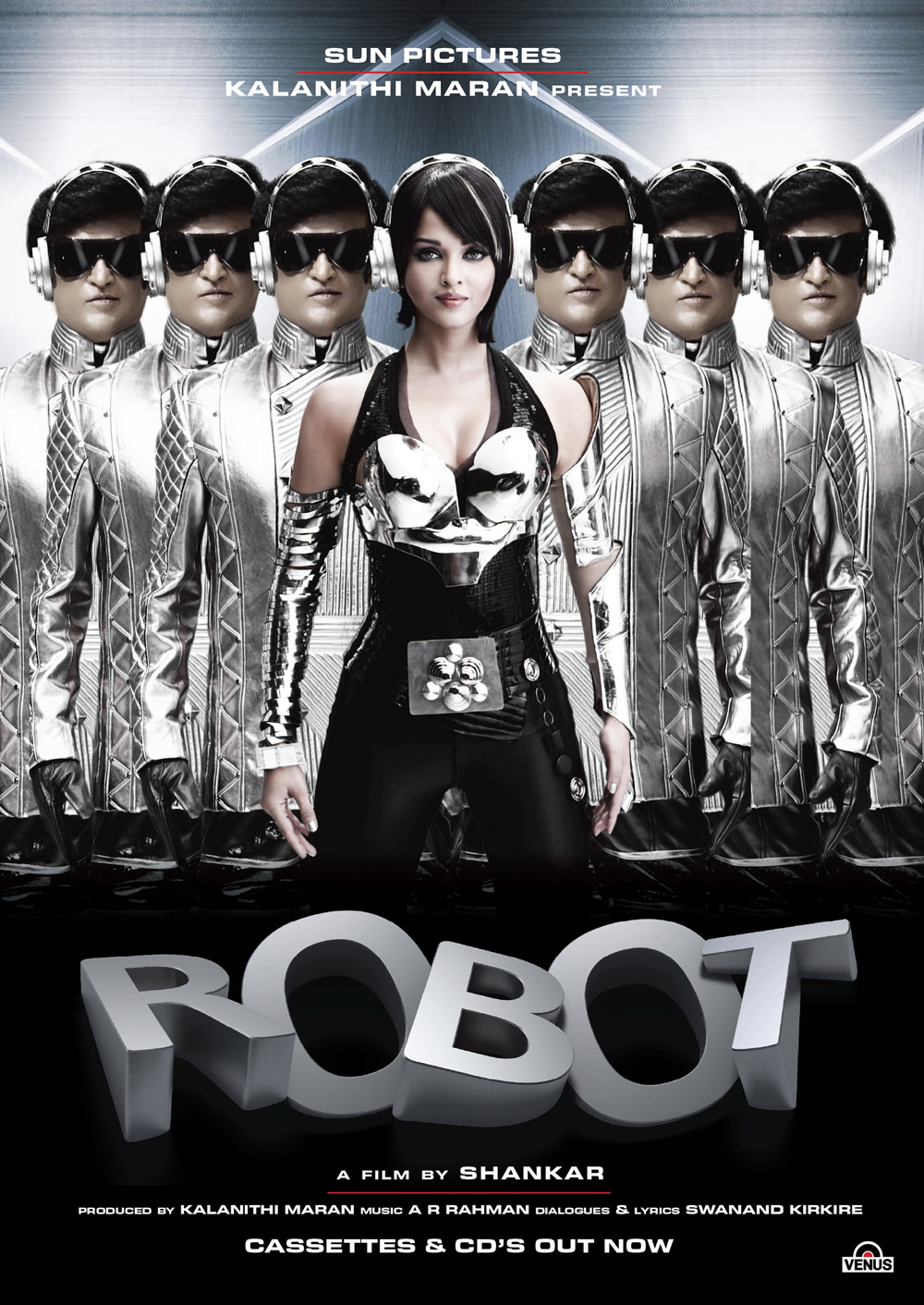 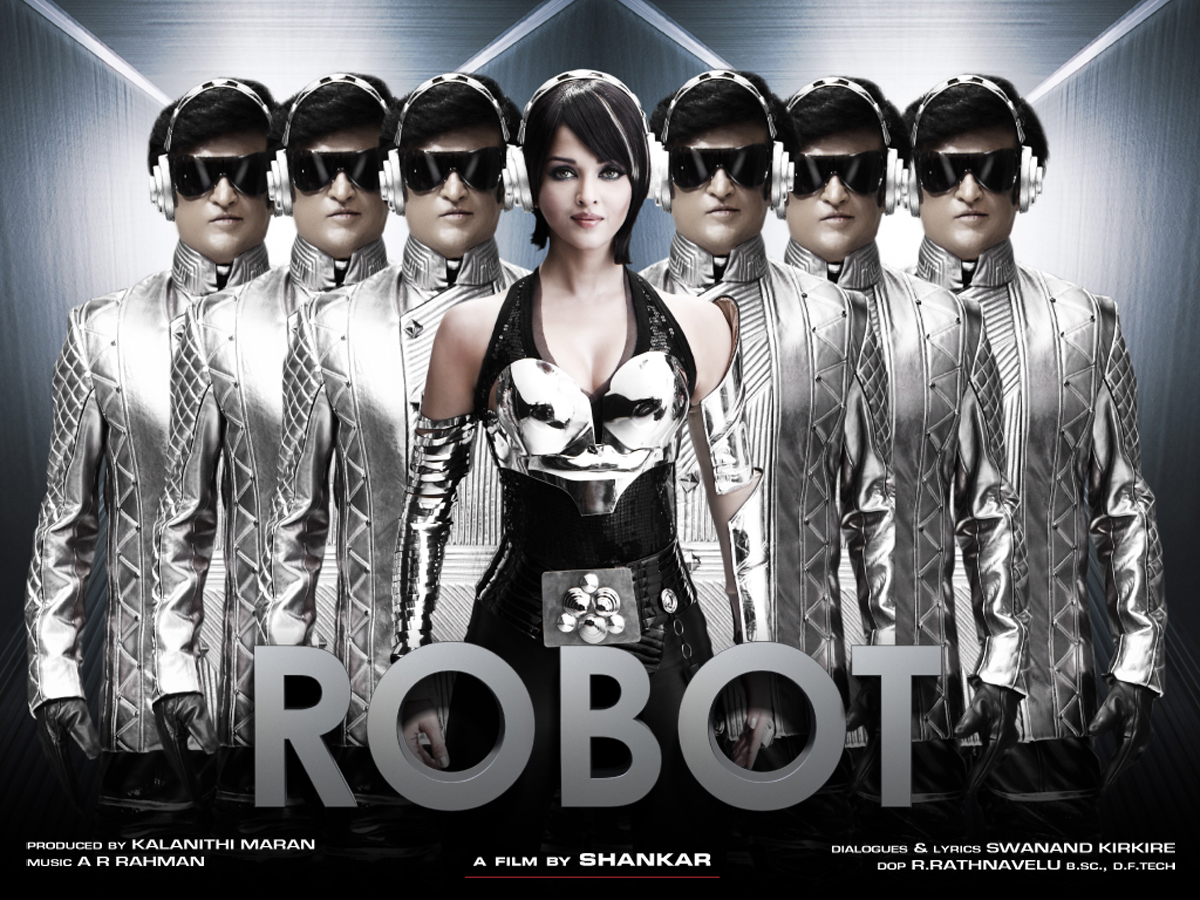 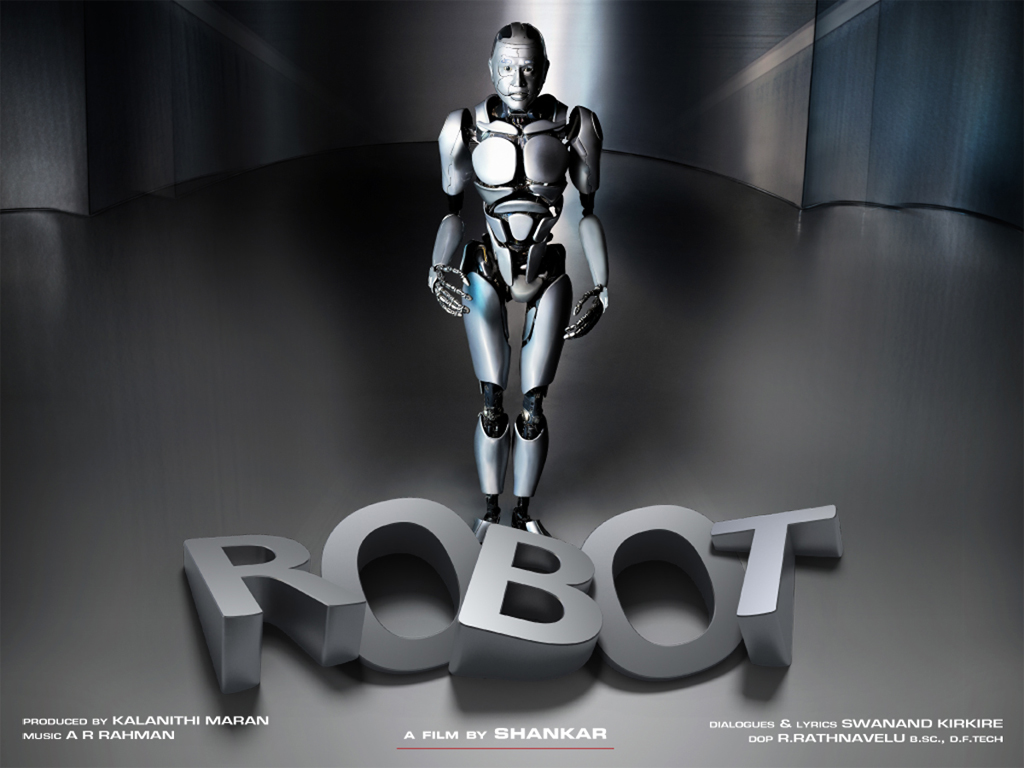 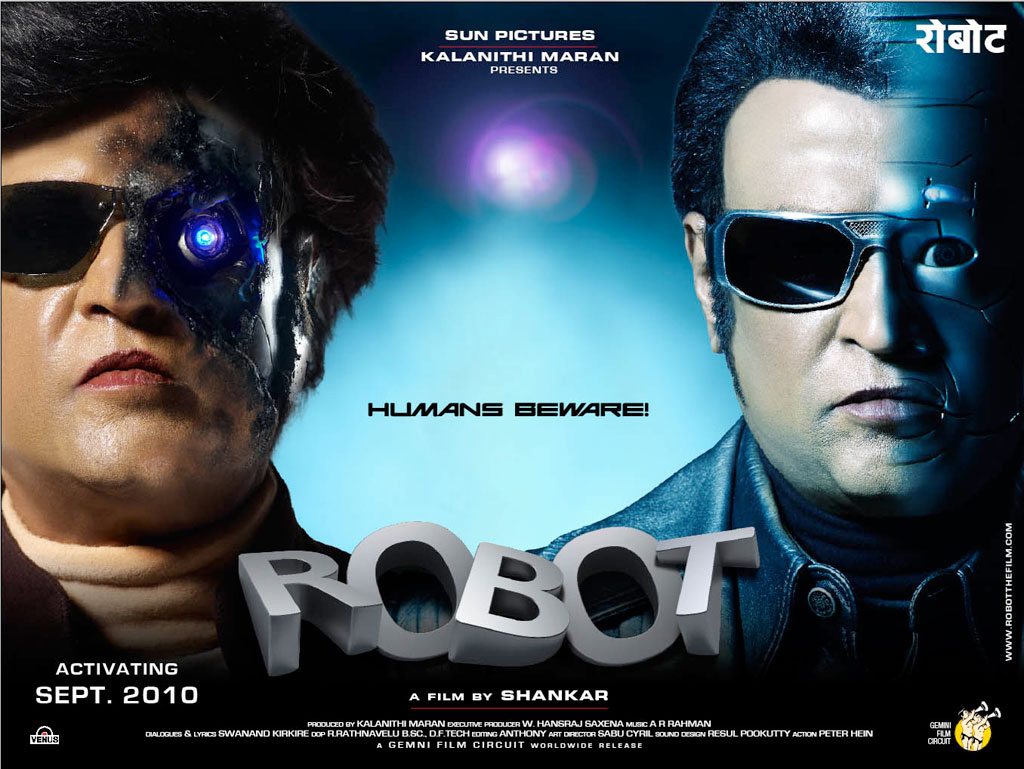 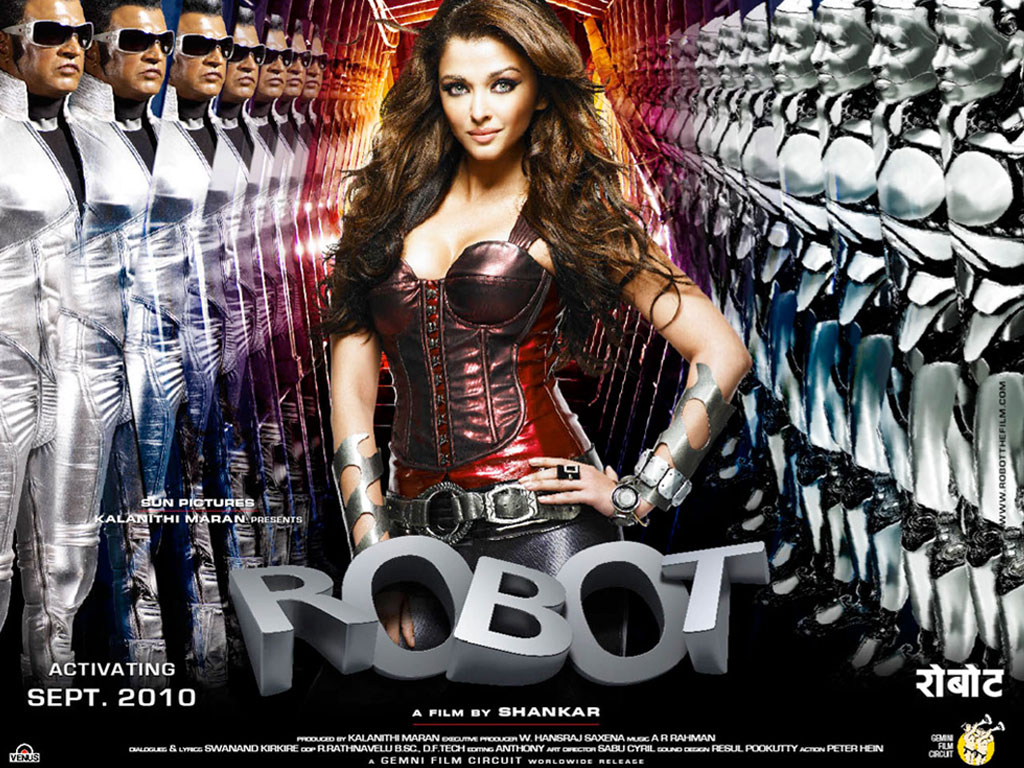 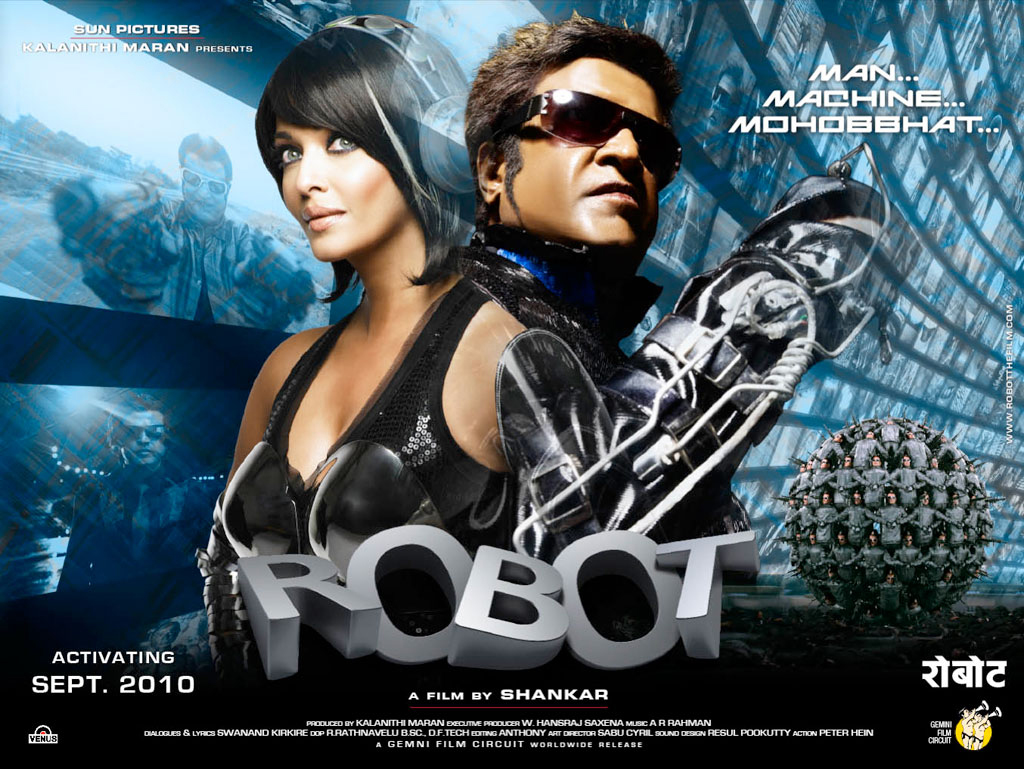