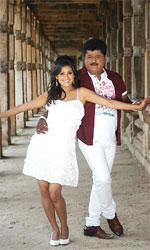 "Lift Kodla" is a well made film - it has a good story, content, technical values and neat performances. Produced by Shankara Reddy, it is a remake of Telugu film "Mee Shreeyobhilaashi", which was inspired by the 1998 Japanese movie "Ikinai".

Noted cinematographer Ashok Cashyap, who has returned to direction after a long time, has made many changes in the script. He has added a love song and created a few sequences to suit the mannerisms of Jaggesh.

So the Kannada remake may not look like the original film, which had a lot of philosophical overtones, but is a good mix of entertaining elements and many touching sequences.

Jaggesh is the main attraction of "Lift Kodla" and he has done some really nice sequences with his brother.

Cashyap has briefly narrated the background of each of the characters, creating some amount of curiosity among the audience. And his camera has captured the visual beauty of Malnad and Kodachadri hills.

However, there are a couple of mistakes that could have been avoided. In creating some of the sequences in a lighter vein, Cashyap has overzealously added some dialogues that don`t gel with the film`s genre.

Some of the sequences in the first half lack the necessary punch. Even the scenes after the entry of Sadhu Kokila could have been handled better. And Sadhu Kokila has sadly overacted.

The story revolves around the protagonist getting together 10 people with suicidal tendencies in a bus from Bangalore to reach the Kodachadri Hills in Shimoga district. They have a common intention to end their lives and all of them agree that the bus they are travelling in would eventually fall from the mountain top. But the police get to know about the plan before it can be executed.

In the course of the journey, the disgruntled people see many things that infuse positive energy in their minds. Meanwhile, the police are on a massive hunt to trace these people who want to end their life. Finally all the people decide to return to Bangalore. But while returning, the driver finds that the brakes of the bus are not working. Watch the film to know what happens in the end.

Jaggesh is a fine actor and he proves yet again that he is capable of taking on challenging roles. Komal also makes a big impact in this film.

Raju Thalikote, Sangamesh Upase bring in a lot of laughs, while Rekha Kumar, and Brahmavar make you emotional with their performance. Shashikumar excels in his brief role as a police officer.