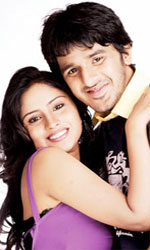 T.N. Nagesh`s debutant venture Olave Vismaya, has an engaging story smartly narrated on the screen. Despite some serious lapses and an unconvincing climax, the film is watchable on the whole.

Olave Vismaya is a well-shot love story with melodious music adding to the picturesque frames. If only the director had given a second thought about the climax, which is unbelievably weak, the movie would have been a lot more convincing. It`s hard for the audience to digest the fact that two people sharing an intense bond could fail to recognise each other`s voice on the telephone.

Nagesh has worked as an associate and co-director to many established directors of the Kannada film industry. He had a good story, but he failed on the treatment front. However, Guru Prashanth`s camera and Veera Samarth`s music are some of the high points of the movie.

The story revolves around the travails of a happy-go-lucky youngster Manu falling for Priya. Just when their love story starts blooming, in a fatal accident Manu loses his leg and Priya loses her eyesight. After a series of ups and downs, the couple unites in the end.

Dharma Keerthiraj, who makes his debut as a solo hero in this film shows a lot of promise. His Ranbir Kapoor looks will surely appeal to the female audiences. However, Prathibha Rani still has a long way to go. Anant Nag, once again steals the show with his wonderful performance. Spoorthi has a brief role in which she comes out in flying colours.

The song Koncha Reshime Koncha Hunnime is a visual treat and has everything going for it to make it a chart buster.

All in all, Olave Vismaya could have been a pleasant watch, but only for its week and unconvincing climax it remains a watchable film.