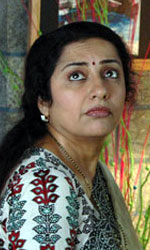 Dinesh Baboo, who strives to make clean comedies, has come out with another enjoyable entertainer with "Eradaneya Maduve" which also scores because of an extraordinary performance from Anant Nag and lively dialogues.

It is a perfect film for family audiences who want to enjoy a neat and engaging comedy.

"Erandaneya Maduve" revolves around the family of a senior government officer, his autocratic wife and three arrogant daughters.

The sequences look real and credible. When you have an actor like Anant Nag performing a tailor-made role, you cannot ask anything better than uninterrupted rip roaring laughter for nearly two hours.

Artists like Sharan, Tara and Rangayana Raghu have also contributed to make the film a treat to watch.

One can always complain about lack of production values in any Dinesh Baboo film. He has certainly made this film with a tight budget, limiting shooting of the film to hardly two or three locations.

But the film`s USP is the clean comedy itself which has offset most of its negative points.

Suhasini Manirathnam and Tara may have overacted in a few sequences, but the delightful performances of Anant Nag, Sharan, Rangayana Raghu overshadow the minor irritants of the film.

The plot goes like this - Vishwanath, a senior government officer from the Lokayukta, has to remain in his house facing suspension from his service on foisted charges. He is humiliated not only by his autocratic wife Malavika and three daughters, but also treated badly by his overbearing brother-in-law and the house maid.

Unable to bear the contempt unleashed by his family members, Vishwanath seeks his troubleshooter friend and advocate Murthy`s advice. He brings in a young girl which leads to many complications in the house.

This leads to another fake love affair between Malvaika and a youth.

The film ends well after all sorts of confusions and complications which give the audience a hearty laugh.

Anang Nag certainly proves that he is unbeatable in such roles. Suhasini Manirathnam is a perfect foil to Anant Nag though she tends to overact in a few sequences. Sharan scores well with his dialogues. Prem and Jennifer come out good in brief roles.