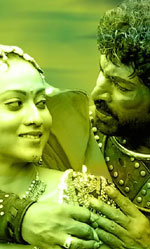 In the publicity campaign, the producer of "Zamana" focused on Bollywood actor Jackie Shroff who not only plays a special role in the film, but has also dubbed in his own voice. It would be difficult to whole-heartedly accept his accent, but Jackie`s efforts are commendable.

Though this is Jackie`s second Kannada film after "Care of Foot Path", it provides more scope for him. He plays a lion-hearted cop who reforms the underworld hirelings. And his presence is the only saving grace in this otherwise ordinary film that is marred by a loose script and a predictable story.

Though the veteran artists have delivered, the newcomers fail to give a credible performance. Surprisingly, the music of Karthick Raja, son of music maestro Ilayaraja, disappoints as his compositions are another weak point of the film.

Anil is a software engineer who is enjoying life with his helpful parents. Then enters college girl Swathi in his life. Once Nitish reciprocates to her feelings, the story takes quite a few twists. He gets involved with an underworld don Mooga who is killed in a gang war and police suspects Anil who is sent to jail.

Meanwhile police officer Ramakanth Thyagi is on a mission to reform rowdies. He thinks politics and criminal nexus is creating a new breed of crime infested youngsters. How Anil and Swathi gets united forms rest of the story.

Nitish has to improve a lot, though he has done well in the action sequences. The director should have worked on hero`s expressions in important sequences.

It seems heroine Akarsha has been completely ignored by the technical team - both her characterization and performance are weak. Sadhu Kokila`s comedy sequences are irritating.

Technically and musically the film falls below the existing standards in Kannada films.

"Zamana" is an average fare and you can find it a little interesting if you are an ardent Jackie fan.