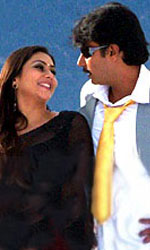 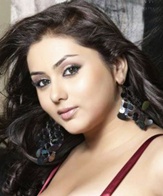 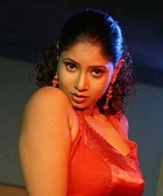 Darshan-starrer Indira was a much awaited film in the Kannada film industry not only because the action hero had the biggest hit of his career in his previous film Gaja, but also because he features in a double role for the first time.

However Indra, which is a remake of Sharat Kumar and Namitha-starrer Tamil film Arasu, is a clear let down for film goers. Darshan`s ardent fans may like a few of the action sequences in the film and two songs shot abroad, but on the whole the film fails to inspire.

The major negative factor of Indra is that the revenge element of the story does not have any freshness. It has been seen many times in previous films including many Darshan hits.

The narration follows the pattern set in by films like Amithabh Bachchan`s Shahenshah and Rajnikanth-starrer Baasha. There have been many Kannada and non-Kannada films which have been inspired by these two films. Indra follows the same pattern and the audience fails to find anything new.

The film has some beautifully shot scenes and cameraman Krishna Kumar and action director Ravi Verma have done a good job. The director Vasu has shot temple sequences in the beginning of the film very well. But these finer points get diluted because of the average musical composition of Harikrishna and an oft-repeated beaten track narrative of the film.

Aiyanna is a good samaritan in the coastal Mangalore city. He has a devoted wife and a doting brother. Aiyanna helps people around him and poor people tormented by villains and law enforcing agencies see him as a messiah. In the process, Aiyanna becomes a terror to the anti-social elements. He gets killed along with his wife by a gang of greedy corporate bosses and their henchman. Indra wants to take revenge and how he accomplishes the task forms the rest of the story.

Darshan has lot of action sequences to please his fans. He has put in efforts to give convincing portrayal in both the roles, But he shines more in Indra`s role. Heroine Namitha`s glamorous exploits are seen only in the song sequences. Veteran actor Ramesh Bhat delivers a good performance, while come back heroine Sanghavi is good in her limited opportunity. Villains Harish Rai and Anand Raj pass muster.

Harikrishna`s average music composition is a big let down. On the whole Indra is an ordinary fare.