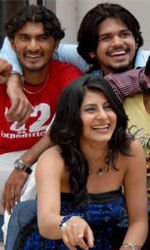 What could have been a really a edge of the seat thriller has ended up as an ordinary revenge drama. This may be an unanimous verdict about "Parole" that had raised high expectations before its release. The film made by National Award winning editor Suresh Urs, had interesting promos.

Director Rajashekha`s first film "Amrutha Vani" was a love story, but he has changed track with "Parole". Before the release, he claimed that he wrote the story after reading many crime related real life incidents in newspapers and that he interviewed several criminals who had come out on parole to understand their psyche.

A touch of authenticity was naturally expected and Rajashekhar doesn`t disappoint in the first half. But in the second half mediocrity sets in.

The main problem is that the director has not been able to maintain consistency in the narrative. Some of the sequences look so amateurish that it is evident he has not learned any lessons from the failure of his first film.

There are no fresh elements in the script and some times it looks as if we are watching a 20-year-old movie.

Talking about the finer points of the film, Kishor`s performance takes the cake. The dialogues by B.A. Madhu are well written and two songs are well choreographed.

Rahul (Sooraj) and Nikhitha (Supreetha) are studying medicine. They are in love with each other. Jaani (Sharath), who is one of Rahul`s close friends, is also madly in love with Nikitha.

Jaani and his three friends Gopi (Likith Shetty), Sharath (Vishwas) and Raj (Pradeep) kill Rahul and they get convicted on the basis of the evidence provided by Rahul`s brother. Using their influence and money power, the four friends come out on parole and plan to kill Rahul`s father Shantha Murthy (B. Suresh) and younger brother.

They manage to kill Rahul`s brother. An enraged Shantha Murthy decides to avenge the death of his two sons and kills Gopi, Sharath and Jaani. A police officer, who is investigating the case, finds a pattern in these killings and finally nabs Shantha Murthy.

What happens to Raj when he faces Shantha Murthy on the day of his marriage?

Kishor comes out with a classic performance in the film. Unfortunately B. Suresha is more theatrical. The youngsters Sooraj, Vishwas, Likith show lot potentials, but Pradeep needs to improve. Supreetha needs to be encouraged.

"Parole" could have been a better film, but the slackened pace and ordinary narration mar the film.