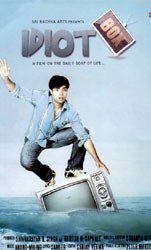 Subhrojeet Chakraborty (Sushant Singh) is given the assignment of enhancing the T.R.P of a T.V. serial consisting of 52 episodes by the Queen of Indian Television Ms. Anekta Kapoor (Jyoti Gauba). By watching the earlier episodes of the serial to incorporate a new track, he finds himself in a jam, since all the necessary tracks of saas- bahu saga, extramarital affairs, dead man coming back, twenty year leap etc. etc. have already been used several times by Anekta. He is completely plank for new ideas, when he meets a bunch of people around him. T.V Mirchandani (Upasna Singh), an avid television viewer, Karuna Sindhu Jagatpati (Surendra Pal), an ex-forest officer & now the secretary of the building in which he live, and of course Sumana Roy Chowdhury (Hrishita Bhatt) someone who hates everything related to T.V. She becomes the girl of his dreams.

Success will give Subhrojeet a secure job in Anekta`s company Lalaji Telefilms with a hefty pay package and failure will send him back to his home town Kolkata. What will Subhrojeet do..?

How he finishes the episodes going through unexpected situations is what the story is all about...