Fitoor is a Bollywood - movie directed by Abhishek Kapoor. Starring . 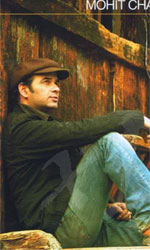 I chase my characters, not my actors: Abhishek Kapoor