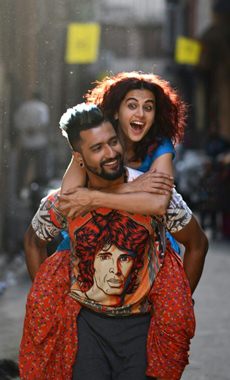 Actress Taapsee Pannu, who has worked in a few horror films in the southern film industry, says Hindi cinema hasn't really exploited the horror genre."I have done two extremely successful horror films in South, my last release in a southern language 'Anando Brahma', was horror. It did brilliantly well and so did 'Kanchana 2'. I think horror is a genre which Hindi cinema per say hasn't exploited much till now," Taapsee told IANS over the phone."I have come across a couple of directors with scripts... who want to explore the genre... The thing is not many see horror separated from erotica till now. That is why I guess of late, we don't have many options to boast about the thing that this was horror and not erotica," she added. Read More

Abhishek Bachchan has shared a priceless Flashback Friday picture with his 'Paa' and legendary actor Amitabh Bachchan.Donning white kurta-pyjamas, the father-son duo can be seen walking side-by-side in the black-and-white photo.The 'All Is Well' star took to Instagram to share the image, writing, "#flashbackfriday Sometime in the mid 90's... Still walking side-by-side. @amitabhbachchan #102notout now playing in a theatre near you. Do watch. #Yo #Badumbaa"Read More