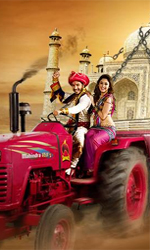 Wah Taj is a Bollywood drama film directed by Ajit Sinha, the movie deals with the ongoing plight and struggle of the farmers and highlights their issues and the corrupt practices of the system and the government. Presented by Jayantilal Gada (pen) under his banner Pen India Ltd. and co produced by Pawan Sharma and Abhinav Verma under the banners of Pun Films Pvt. Ltd. and SpyderWave Films. Featuring actors Shreyas Talpade and Manjari Fadnis in the lead roles.