WHEN THE BOUGH BREAKS

When the Bough Breaks 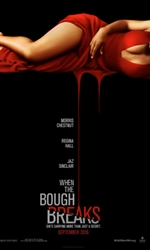 When the Bough Breaks Synopsis

John and Laura Taylor (Morris Chestnut and Regina Hall) are a young, professional couple who desperately want a baby. After exhausting all other options, they finally hire Anna (Jaz Sinclair), the perfect woman to be their surrogate – but as she gets further along in her pregnancy, so too does her psychotic and dangerous fixation on the husband. The couple becomes caught up in Anna’s deadly game and must fight to regain control of their future before it’s too late.

When the Bough Breaks trailer